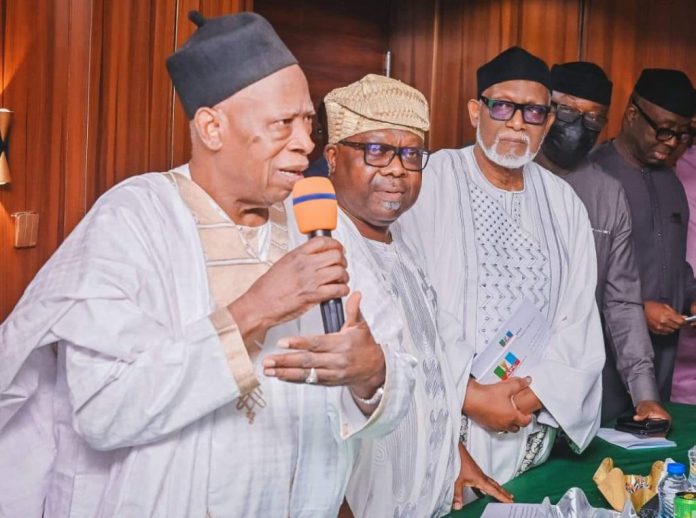 Sen. Abdullahi Adamu, the All Progressives Congress (APC) National Chairman has expressed optimism that the party will emerge victorious in the June 18 Ekiti governorship election.

Adamu said this on Monday in Abuja, when he inaugurated the APC Ekiti State Governorship Campaign Council.

He said that six women were included in the council to represent the women wing of the party.

According to Adamu, the now 67-member council headed by Gov. Abubakar Bagudu of Kebbi, will take charge of campaign and marketing our candidate for the Ekiti governorship election.

Adamu said the fact that the outcome of the primary election that produced Mr Biodun Oyebanji as the party candidate for the election was unchallenged, meant that it was thoroughly done.

“Once there is a contest, there will be a winner and a loser, we are never on the losing side.

“But we don’t take that for granted, we are going to work as hard as we can to ensure that we deliver our governorship candidate as the next governor of Ekiti State,”he said.

He said that a victory for APC in Ekiti would be a good way to start the end of the second term of office of President Muhammadu Buhari.

He added that the party would be guided by the rules of engagement for election, in spite of its desire to win.

“We do hope that those who will be responsible for overseeing the compliance will be fair arbiters, referees and umpires.

“It is our hope and prayers that God Almighty will be with us, guide us and ensure that victory is ours,” he said.

Bagudu, in his response, thanked the party leadership for the honour and opportunity to serve.

“Four years ago, we also had governorship election in Ekiti State and I was privileged and honored to serve as the chairman.

“But then, we were in opposition in the state, not in government, and then also, it was our first test in 2019.

“But we did win convincingly because we did not go into that election with any sense of entitlement, we went there with fair mind and determination to win.

“And with the support of the party’s National Working Committee (NWC), we won convincingly,” he said.

Bagudu assured of striving hard to reciprocate the party’s confidence on the council.

Alhaji Mohammed Argungu, the APC National Organising Secretary in his remarks, said the party confidence in winning the Ekiti State governorship election was further boosted by the totality of the characters of members of the council.

“Bagudu is a strategic minded governor, who has done it four years back with all success, now supported by an eminent field of like-minded governors and other very distinguished leaders,” he said.