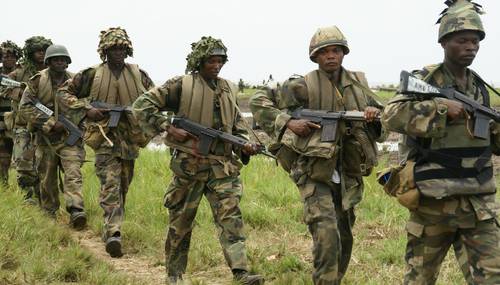 40 Boko Haram terrorists have been killed by the Nigerian Army, arrested 18 and rescued about 230 victims around Sambisa forest in the last one month.

The Theatre Commander of Operation Lafiya Dole, Major General Ibrahim Attahiru, made the disclosure on Wednesday at a press conference at the Command Control Center, Maiduguri.

Apart from those neutralised, it was learnt that about 10 insurgents voluntarily surrendered.

He observed that the newly-launched Operation DEEP PUNCH 2 and Operation RUWAN WUTA in Sambisa forest is yielding dividend, explaining that the two operations focused on coordinated aerial bombardments by the air and artillery platforms supported by land operations have led to the decimation of insurgents.

Gen Attahiru reiterated that the Mobile Strike Teams (MSTs) inaugurated in August have made significant success at ensuring that the Main Supply Routes (MSRs) were adequately patrolled and secured on a daily basis.

While emphasising that economic activities are been restored, the theatre commander said, “Some of the operations led to the killing of two key Boko Haram commanders, Abdu Kawuri and Abubakar Benishek, in a successful operation on September 1 at Alafa in Bama Local Government Area.

“Additionally, a prominent Commander, Ba’abba Ibrahim, and two other commanders died after sustaining injuries during their last encounter with our Special Forces in an ambush at Magumeri council.

“In another encounter, our troops had repelled an attack on IDPs camp at Banki. The attack followed discreet insurgents’  infiltration into the area through the Nigeria – Cameroun border.

“The fire fight between our troops and the insurgents resulted in the death of two insurgents and caused others to flee. Unfortunately, 11 IDPs were killed and two others were wounded in the process,” Attahiru said.

The commander said that the the troops also arrested 18 Boko Haram terrorists and their collaborators after they infiltrated into IDPs camp and that the suspects were currently undergoing investigation.

“Also, on 12 September, 17 of our troops successfully sprung an ambush against insurgents using the Firgi crossing point in Bama Local Government Area to access the Sambisa forest.

“The ambush was extended to Mallam Gonare where 2 Boko Haram terrorists were killed. Troops also recovered unexploded ordnance and 7.62 mm ammunition during the operation.

“In the same vein, our troops also ambushed fleeing elements along Road Ngoshe – Bokko Kugile and killed one of the insurgents and recovered three bicycles, two wrist watches, two SIM cards and the sum of N1, 140.

“Similarly, on 14 September,  in conjunction with vigilantes group,
our troops sprung ambush against insurgents around Lokodisa in Gwoza Local Government Area.

“One terrorist was killed while others fled with gunshot wounds. Troops also recovered one AK 47 rifle, 117 rounds of 7.62mm (NATO) ammunition, 14 rounds of 21mm, seven bicycles, one trolley, a machete and two jerry cans.