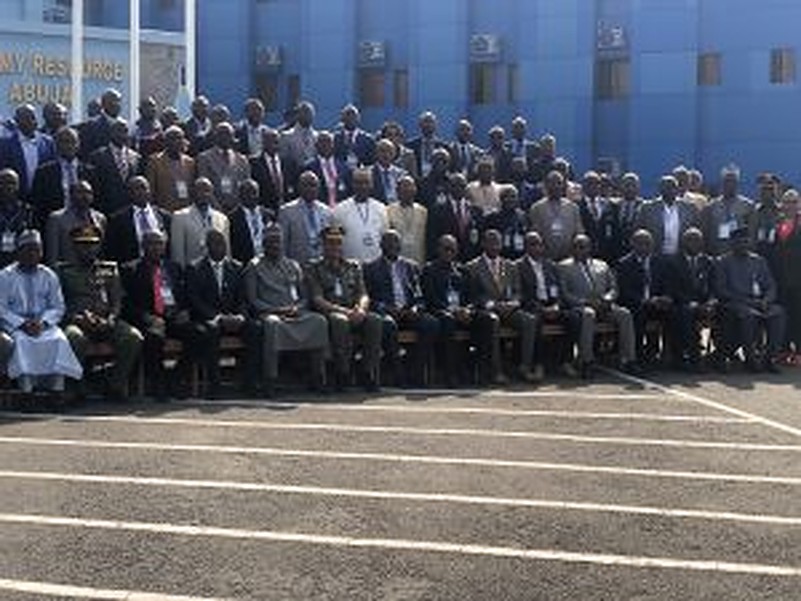 Army, NITDA collaborate on modern technology for national security
Share this on WhatsApp
Spread the love

The Nigerian Army has collaborated with the National Information and Technology Development Agency (NITDA) on the utilization of modern technology to tackle the activities of insurgents and other security challenges in the country.

Speaking during the opening ceremony of a seminar on Monday in Abuja, the Chief of Army Staff (COAS) Lt. Gen. Faruk Yahaya, said the nation was currently witnessing one of the most challenging times in its history.

Yahaya, who was represented by the Chief of transformation and innovation, Maj. Gen. Charles Ofoche said that the seminar aimed at broadening the knowledge of participants.

He said this was on the roles of inter-agency collaboration and the use of technology to address national security challenges.

He said that the country was facing insecurity issues, considering the myriads of complex security challenges bedeviling Nigeria.

He also said that the security environment was replete with acts of insurgency, terrorism, kidnapping, and banditry from BHT, ISWAP, IPOB, ESN, and other terrorist organizations.

He added that the acts had continually posed huge threats to national security and cohesion as a country.

According to him, the complexities of these threats cannot also be addressed without harnessing the capacity of our security agencies.

He said, however, there had been various policy options adopted by both the Federal and some state governments to address the security challenges.

“The emphasis has been more on the kinetic approach. However, there is a huge requirement for non-kinetic efforts which include the use of technology and whole of government and society approaches.

“There is this a compelling requirement to explore the utilization of modern technology and leverage more on inter-agency collaboration towards addressing these challenges, ” he said.

The Army chief urged security commanders at all levels to make deliberate efforts towards fostering practical cooperation and collaboration by their personnel in the course of operations.

This, he said, could not be achieved without training in inter-agency collaboration.

He reiterated the need for respect for human rights by security agencies in the conduct of operations, in accordance with human rights laws and constitutional responsibilities.

The Director General, Nigerian Army Resource Centre (NARC), Maj.-Gen. Garba Wahab (rtd) said that the essence of the seminar was to bring security agencies and other stakeholders to collaborate on ways to tackle insecurity.

Wahab said it was necessary to teach the use of technology, adding that it was not something to run away from as the Army had been using it.

“Other security agencies need to use technology in information gathering for us to have a better platform and attitude towards tackling insecurity, ” he said.

The Director, of Research and Development, at NITDA, Dr. Collins Agwu, said that the insecurity in Nigeria was a challenge for all, adding that every effort must be put in place to curb the menace.

Agwu said in spite of the huge investments injected into the security sector, the government had not been able to tackle the challenge that had been troubling the well-being of the nation for a long time.

“The growing challenge of insecurity in Nigeria was a concern to all and every effort must be made to curb the challenge.

“Moden Technology has been introduced and we believe this will go a long way to avert this menace.

The News Agency of Nigeria reports that the seminar was organized by the Nigerian Army Resource Centre in collaboration with NITD.

Share this on WhatsApp
Related Topics:Armymodern technologynational securityNITDA
Up Next