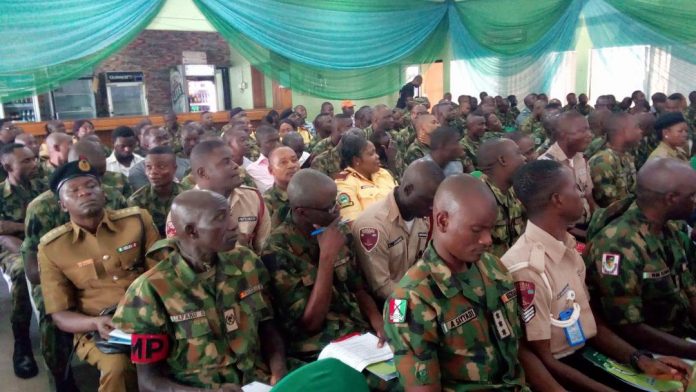 The Nigerian Army on Monday carried out intensive training exercise for military and para-military personnel aimed at keeping them fit for the Exercise Crocodile Smile IV.
The Special Guest of Honour, Flag Officer Commanding, (FOC), Western Naval Command, Rear Admiral Oladele Daji, who declared the one-day training opened at the 9 Brigade Officers Mess, Ikeja, said that the exercise would cover land and water ways, nothing that most criminal activities were planned and executed both at land and at sea.
The theme of the training is “Interagency Cooperation: Imperatives for Efficient Joint Operations”. Crocodile Smile 4 would commence on November 8 to December 23, 2019.
Explaining the objectives of the training, he said it was met to “avail commanders and staff officers in the art of military decision making process, staff liaison and conduct of riverine operations.
“It will also avail troops on combat responsibilities in internal security operations and promote efficient joint operations in 81 Division Area of Responsibility (AOR).”
Admiral Daji further noted that the exercise would feature aspect of Civil-Military Cooperation, Media, Psychological operations, Rules of Engagement and the observance of International Humanitarian Law in the conduct of joint operations.
“Let me also stress here that the exercise will be supported by the on Navy, Air force, Police, DSS, and other security agencies in Lagos and Ogun States
“I hope that it will assist in carrying out the myriad of internal security responsibilities especially those that concern the protection of lives as well as critical national assets against attacks,” he said.
Earlier the Chief of Army Staff, Lt Gen. Tukur Buratai, in his address, said that the exercise would be conducted in support of other sister agencies.
Buratai, who was represented by the General Officer Commanding, 81 Division, Nigerian Army, Maj Gen. Olu Irefin explained that the exercise which would be conducted with the support of sister services and relevant security agencies.
In addition, during the period,  the military would showcase lavish civil military relations activities like medical and educational outreaches as well as renovation of social amenities and infrastructures.
The maiden edition of Operation CROCODILE SMILE I was conducted in the Niger Delta region in 2015.
It was gathered that the exercise yielded tremendous successes which included degradation of the activities of militants, destruction of kidnappers’ dens, rescue of kidnapped victims and destruction of cultists’ camps among others.
In one of the lectures on “The Assessment of Security Situation in Lagos State”, delivered by Salomey Akala of the DSS enjoined participants to work in unionism to achieve the aims of the exercise. She observed that the peculiar metropolitan nature of Lagos has thrown up some security challenges resulting in clashes among cult groups, robbery and other organised crimes. 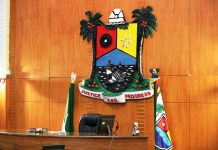