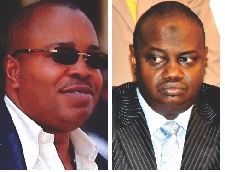 (EFCC) and what the commission actually said in its press state statement. At least, this would save one’s self from unnecessary vexation and heartbreak about the way things are going in this country.
Curiously speaking, what is the EFCC actually up to in trying to blackmail everybody but its officials in its alleged complicity in Saltpond crude oil theft scandal?
Is it not curious that instead of at least responding to the allegation against it by both Quincy Sintim, the owner of the Ghanaian Saltpond oil facility and Jarret Tenebe, the managing director of Fenix Impex Limited, the EFCC preferred to first arrest the man (Tenebe) and hide him under the guise of discovering $50 million leftover of the Saltpond crude oil transaction in his account? So it took the American authourities to blow the whistle for the Nigerian anti-graft agency to switch on its touch light to look into Tenebe’s company accounts? When are we going to start being serious as a nation craving to move forward?
It was a US investigation of the activities at Saltpond oil platform that informed Nigeria’s law enforcement authorities that several vessels linked to Mr. Tenebe’s Fenix Impex Nigeria Limited were involved in the ferrying of stolen crude from Nigeria to Ghana via the Saltpond oil platform.
Saltpond Lushann International Energy Corporation, an American oil firm with headquarters in Houston Texas as reported, denied any wrong doing though the company did not dispute that some of the oil it loads into tankers at Saltpond come from Nigeria. The curious aspect of the statement by the owner of Saltpond, Quincy Sintim, was his insistence that the company purchases the crude oil legally from the Nigerian government’s Economic and Financial Crimes Commission (EFCC), the authority with primary responsibility for cracking down crude oil theft and smuggling from the country.
As also expected, Mr Tenebe denied involvement in any illegal ferrying of crude oil from Nigeria affirming the statement by Saltpond. He disclosed that his company, Fenix Impex has been the official EFCC contractor that helps the commission dispose (sell) crude oil consignments seized from oil thieves and illegal bunkerers by Nigerian military and law enforcement agencies.
According to Saltpond Lushann, the EFCC sells crude that it seizes in its pursuit of oil theft. “The only crude we take from Nigeria…has been seized by the government. We have invoices that we pay to EFCC Nigeria,” the President and owner of Lushann, Sintim, was quoted as saying in a telephone interview by the Wall Street Journal.
Should Nigerians be telling the EFCC that the commission seriously needs to clear this issue before ever delving into anything that looks like arrest or investigation into the matter?
Why should The EFCC prefer to secretly arrest and detain Mr Tenebe on the allegation that $50 million was found in an account belonging to him and that the money was a leftover of deposits from the illegal sale of crude oil through Saltpond Oil platform in Ghana?
The commission held this man for over a week and did not say anything concerning his arrest until the story was leaked to the media. Haba! What does this say about the anti-graft agency?
The mere fact that Mr. Tenebe was arrested and put under investigation for over one week without making the information public or charging the suspect to court, raises some serious questions about the genuineness and integrity of the EFCC’s latest onslaught against him especially when the man was already said to have linked the EFCC as accomplice in the same matter.
Whether the commission wants to hear this or not, dodging the serious allegation by Saltpond Lushan by intimidating and blackmailing almost everybody in Nigeria particularly the ruling Peoples Democratic Party (PDP), President Goodluck Jonathan, Chief Tony Anenih, the Petroleum Minister, Mrs Diezani Allision-Madueke amongst other prominent names in government and in the military, will not save the EFCC from explaining and/or exonerating itself from this alleged complicity. Mark my words!
First and foremost, this is the pending question for the anti-graft agency: Was there any legitimate contract between the Federal Government (The EFCC in this instance) and Saltpond Lushan through Tenebe’s Fenix Impex to trans-ship oil that law-enforcement agencies in Nigeria confiscated from thieves?
Secondly, whose responsibility has it been to warehouse and subsequently sell crude oil confiscated from thieves and vandals in the Niger Delta- the EFCC or NNPC?
If the EFCC at any time engaged Tenebe’s company, Fennix Impex or whoever to dispose confiscated crude oil, we need to know how long the contractor (s) has been working for the commission. We also need to know the actual volumes and dates of consignment (s) lifted by the contractor (s) on behalf of the federal government (in this instance the EFCC).
How much has the EFCC or whoever generated from sale of crude oil recovered from oil thieves since this transaction started? And where is the money generated over time from these transactions- is the revenue with the anti-graft commission or handed over to the NNPC or even DPR? Do we have records of these sales with the Revenue Mobilisation and Fiscal Commission (RMFC) or even the Federation Account?
We need more serious and detailed explanation of the involvement (if at all) of the EFCC in the serial sale of confiscated crude recovered from oil thieves in Nigeria.
When the Wall Street Journal reported this case, it fingered the EFCC’s culpability. If the Americans are aware that our anti-graft agency has been selling stolen crude oil confiscated from vandals and thieves, is it Nigerians whom the commission was set up to serve that are not supposed to know? God help my country, Amen!
(IFEANYI IZEZE is an Abuja-based Consultant and can be reached on: [email protected]; 234-8033043009)