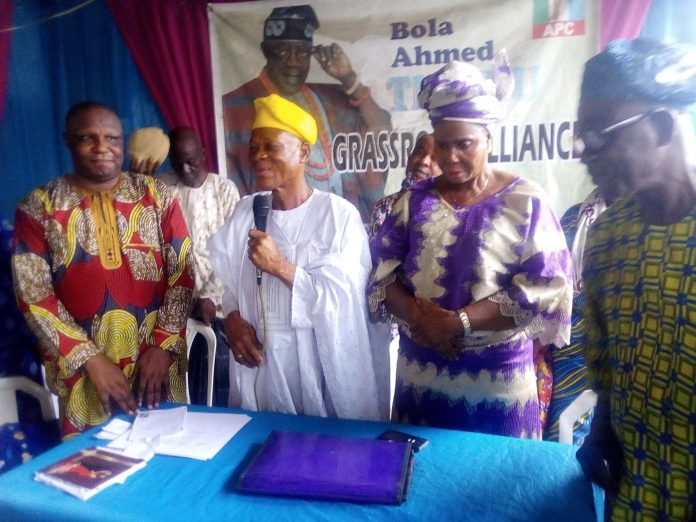 Share this on WhatsApp
Spread the love
The Bola Ahmed Tinubu Grassroots Alliance (BATGA) has inaugurated its State executives,to evolve a formidable political representation all around Lagos State, citing the importance of entrenching active political participation at the community level ahead of 2019 general election.
BATGA, a group constituted to address the welfare of members of the All Progressives Congress (APC ) at the grassroots, with a membership drive that cuts across the five political divides of the state namely; Ikeja, Epe, Badagry, Ikorodu, Lagos Island,initiated a strategy to further sell the APC’s ideology around the state.
The inauguration of the new state executives was witnessed by a close relation of the National Leader of APC, Bola Ahmed Tinubu, Hon. Prince Nurudeen Adesola Taiwo who was overwhelmed by the crowd of people present at the forum, citing it as a good omen that indicates the future of the group and by extension APC is quite bright.
The Electoral officer Mr. Oyewale Oyetunde who coordinated the election noted that the exercise was thorough and that the individuals going by the records had distinct themselves at one time or the other in time past.
The newly elected state executives some of whom were; Legal adviser Barr Adebola Ladigbolu, Chairman Engineer Abdul Rasheed Shonibare from Ikorodu division , Vice Chairman Alfa Mufutau Ogunkojo from Badagry division ,Secretary Folawiyo Adams from Lagos Island, Treasurer L .O Opalola Badagry,P.R.O Evangelist Yusuf Abdullateef Ikeja division,Women leader from Epe division Mrs Mutiu Mosunmola and the Youth President Mr Odunayo Alao from Ikeja division, were duly sworn in.
Reverend Godwin Osimen a Leader in BATGA also delved into the import of the group in Lagos ,nothing that “BATGA is an organization born out of the intention of mobilizing people for APC.
“The new excos will be operating for minimum of two years. The membership influence and clout are enormous in the sense that we get support from our leaders which is distributed amongst all through Bola Tinubu food foundation,this group distribute on behalf of the organization.
According to Osimen, if hunger is beaten the people are relieved .People are in politics for what they can be and what they can get and if a there is a group that takes care of them who are fully in the grassroots that is politicking.
ALSO SEE: How Nigerians reacted to Atiku’s resignation from APC
He further emphasised that BATGA work to justify whatever we get and with our strength or sweat we do what we are doing.
Osimen also charged the newly elected officials to be ,committed,consistent and not to be self centred,if you had any problem contact the leadership forum of the group
The founder of BATGA, Chief Mrs. Ebun Akinyemi, (A.K.A Iya Alimosho) who could not hide her joy for the rebirth of the group for better political consideration noted that the time effect more positive change in the polity of Lagos is now.
Akinyemi urge all members not to relent in flying the APC’s flag, as their future is assured with the party.
In his acceptance speech Shonibare noted that cardinal to his tenure is the reinvention of BATGA, to determine the Lagos polity power game come 2019 and maintain a higher level of political relevance.
The South West Exco election will come up very soon.
Share this on WhatsApp