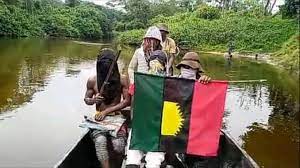 The militia wing of the Biafra Nations League (BnL), Black Marine, at Nigerian border community, confronted the Cameroonian military in exchange of gunfire in the early hours of Thursday, killing two of the Cameroonian soldiers.

Operatives of the Black Marine were said to be on their way to Ikang on Nigeria’s borders at about 5.55am on Thursday but were intercepted by troops of the Rapid d’intervention Battalion (BIR) of Cameroon who started shooting at the Black Marine members a few kilometers away.

The BNL militia were said to have engaged the BIR in power show, and killed two soldiers, as one of the militants sustained bullet injuries.

The Black Marine boys were said to have moved from there to Abana waterside, where they

The Black Marine of the Biafra Nations League has been operating in the Bakassi Peninsula waterways and the Gulf of Guinea in advancing agitations for the Sovereign State of Biafra.

Zoom appoints Cindy Hoots to Board of Directors