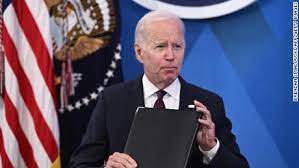 President Joe Biden of the United States (US) has arrived London, having departed the US on Saturday, to attend the state funeral of Queen Elizabeth II, holding on Monday at Westminster Abbey, London, at 11.00 am (1000 GMT).

Biden is scheduled to attend a reception organized by King Charles III, on Sunday.

The White House a scheduled meeting between Biden and the British Prime Minister, Liz Truss, at 10 Downing Street, on Monday has been canceled. The meeting was rescheduled for Wednesday in New York before the annual United Nations General Assembly.

The United Kingdom (UK) invited leaders of the European Union, France, Japan, including several other countries from Africa and Asia, but excluded Russia, Afghanistan, Myanmar, Syria and North Korea to the state funeral of the demised Queen.