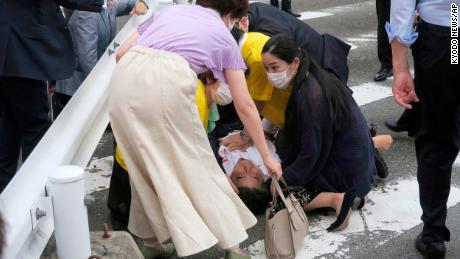 Former Japanese prime minister Shinzo Abe is dead, after being shot during an election campaign event on Friday morning.

Abe succumbed to his injuries after the gunshot during a speech, according to media reports on Friday.

The alleged shooter is a former member of the country’s Self-Defence Forces, according to Japanese television station NHK, citing Defence Ministry sources.

According to media reports, the arrested man said he was dissatisfied with Abe and wanted him dead.

He stepped down due to illness but maintained a strong political presence.

One of his main focuse was improving the country’s defences and upgrading its constitution so Japan could participate in foreign military ventures.

The accused allegedly fired two shots at Abe from behind, using a homemade firearm as Abe gave an election campaign speech in the city of Nara.

Abe, who served four terms in total and became Japan’s longest-serving prime minister, remained a heavyweight political figure even after he stepped down from his last stint as premier in 2020.

Abe was shot on Friday, as he was campaigning as a candidate for the conservative Liberal Democratic Party (LDP).

His grandfather helped to found the LDP, and it was also the party of his father, former foreign minister Shintaro Abe.

Furthermore, since 2021 Abe had been head of the largest established faction within the LDP.

Some saw Abe during his time in power as a patriot who wanted to bring Japan back to a position of strength in Asia and adapt it to the modern era.

Others saw him as a right-wing populist and foreign policy hardliner, under whom Asia’s oldest democracy turned away from its pacifist post-war policy.

The battle over Japan’s role in the world and in particular the role of its military was still a highly sensitive issue in the country.

A flashpoint of the debate is calls led by Abe for changes to Japan’s post-war constitution.

Born in 1954, Abe was strongly influenced by his grandfather Nobusuke Kishi, who served as premier from 1957-60.

After graduating from Seikei University in Tokyo in 1977, Abe briefly studied politics at the University of Southern California.

He then worked at Kobe Steel before entering political life in 1982 as an aide to his father, Shintaro Abe.

After his father’s death, Abe ran for parliament and was elected in 1993.

He gained popularity partly by taking a tough stance against North Korea.

In September 2006, Abe became prime minister for the first time, but after a year in office, he resigned for health reasons.

The hawkish Abe, however, quickly became popular amid mounting tensions with China and South Korea because of territorial disputes in 2012.

He staged a successful comeback as premier that year.

The first head of government born after World War II, Abe ruled Japan from December 2012 to September 2020, when he stepped down for health reasons, making him the country’s longest-serving prime minister.

Notepad Former Japanese prime minister Shinzo Abe, who was shot at a campaign event on Friday, still wielded considerable power even after stepping down as premier in 2020.

Share this on WhatsApp
Related Topics:AbeBREAKING NEWSDeadEx-Japanese PM
Up Next

Buhari commiserates with Japan on tragic death of ex-Prime Minister