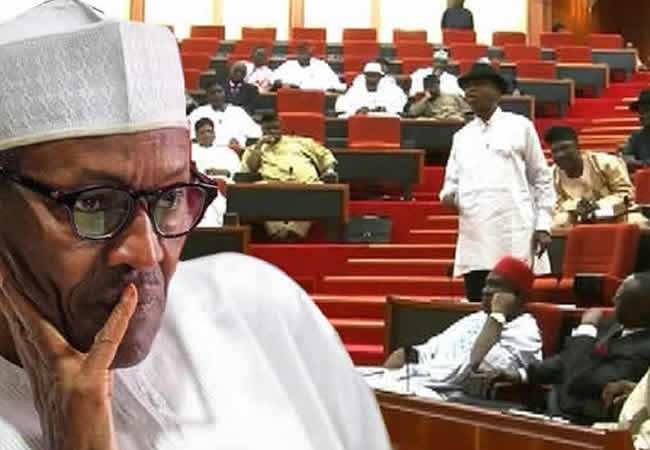 The rosy relationship between the Nigerian presidency and the National Assembly appeared threatened on Tuesday by the resolution of the two chambers of the federal legislature on the service chiefs of the Nigerian Armed Forces.

The Senate a motion moved by Senator Ali Ndume at plenary on Tuesday on the intractable insecurity in Nigeria made a resolution urging the service chiefs of the Nigerian Armed Forces which comprise of the Nigerian Army, Nigerian Navy and he Nigerian Air Force, to step aside or get sacked.

President Muhammadu Buhari, however, in speedy response challenged the resolution of the National Assembly and hypothetically questioned the usurpation of executive powers by the federal legislature. The president also asserted himself as not being an indolent leader who is unaware of the increasing insecurity realities in the country, insisting that he will do his best in the general interest.

The presidency in a brief statement on Tuesday, accordingly, fumed over the resolution of the Nigerian Senate demanding that the service chiefs should step aside. The presidency, acknowledging the resolution of the Senate calling on the Service Chiefs to resign or be sacked due to the multi-pronged security challenges in the country, bluntly told the National Assembly  that the appointment and dismissal service chiefs are within the prerogative of the president, adding that the president will do what is in the interests of the country.

Senator Ndume had moved the motion with reference to the recent ambush of soldiers in Katsina and the alleged voluntary resignation of over 350 soldiers.

Senator Ndume argued that both developments and others are worrisome.

Senator Ndume further argued that if the trend continues, the government should expect that there will be dire consequences for the country. He, however, did not recommend the sack or resignation of the service chiefs; the resolution to end their tenures emerged from deliberations of other senators at the plenary.

National Daily investigation showed that the approach adopted by the leadership of the Ninth National Assembly is becoming counter-productive in this circumstance. The leadership of the Ninth had under the guise to be less confrontational shifted emphasis from direct check on the president in their oversight functions or the checks and balances mechanism embedded in the principles of separation of powers to directly issuing instructions to political appointees of the president. While the National Assembly may be acting within the sentiments of the realities in the country, the action of the federal lawmakers in the resolution on the service chiefs to step aside or be sacked is clearly ultra vires and an encroachment on executive powers. Invariably, the presidency may be right in its response, though, rash at the same time because the insecurity crisis is not new to President Muhammadu Buhari and why has he not taken effective actions to contain in the five years of his administration.

However, the leadership of the National Assembly in such resolution would have communicated it directly to President Buhari and follow up with consultative meeting than attempting to exercise executive powers in a disguise threat to the tenure of the service chiefs appointed by the president. The lawmakers tend to portray the president as either weak or inactive which the presidency responded quickly to assert President Buhari’s responsibilities.

Moreover, the executive/legislature relations suffer further discord on the 774,000 ad hoc public works job creation which is projected to cost billions of Naira. The National Assembly had passed a resolution against the project embarked upon by the Ministry of Labour but the presidency insists on going ahead with the programme. The National Assembly proceeded to order the Ministry of Finance from releasing funds for the 774,000-public works programme which President Buhari has approved and is coordinated by the Minister of State for Labour, Festus Keyamo. In this circumstance, while the National Assembly work towards checking the executive to ensure balance, the president tend to exercise paramount powers in total disregard of the legislature.

Ultimately, the leadership of the Ninth National Assembly face high risk of being hunted by its approach to handling executive matters; the danger is that the National Assembly would be seen at all time to be usurping the powers of the President at all time in the pretense to shield the president from public discourse.

However, destruction of property and loss of lives have persisted over the years, intensifying the insecurity crisis to disturbing proportion. Nigeria has been contending with Boko Haram terrorism in the northeast, emergent banditry in the northwest, kidnapping, armed robbery in other parts of the country over the years. The turning point to threaten the national security deeper is the killing of soldiers deployed to fight the violent groups.