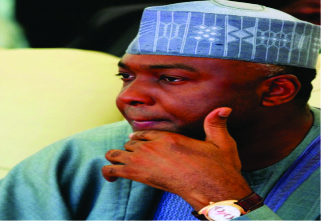 …Why PDP Senators are angry

THESE are definitely not the best of times for the President of the Senate and former Kwara State Governor, Dr Olubukola Saraki as political fences erected to safeguard his office seem to be crumbling while those bent on pulling him down are said to have gained the upswing.
And insiders have predicted that it may be a matter of weeks or few months for the number three citizen to lose his seat to the machinations of traducers bent on humiliating him and thereby pave way for a successor acceptable to the leadership of the ruling All Progressives Congress (‎APC).
Deals reportedly made by Dr Saraki to stave off the ongoing trial at the Code of Conduct Tribunal (CCT) ‎have also hit the rocks despite keeping to his own side of the bargain, a development said to have placed him in a quandary.
National Daily had exclusively reported that the President of the Senate agreed to a deal with President Muhammadu Buhari and the APC to allow former Rivers State Governor, Hon Chibuike Rotimi Amaechi to be screened and confirmed as a minister of the Federal Republic of Nigeria.
In return, President Buhari and the APC led Federal Government were expected to prevail on the‎ CCT to drop trumped up charges of false declaration of assets against Saraki, a deal which it is learnt has not been kept.
The President of the upper legislative chamber incurred the wrath of the national leader of the APC, Senator Bola Ahmed Tinubu and Buhari when he connived with PDP senators to clinch the coveted position as against Senator Lawan who was the preferred candidate of the ruling party.
APC had reportedly unleashed several schemes, including inviting Saraki’s wife, Tosin to the Economic and Financial Crimes Commission (EFCC) for alleged corrupt practices and the celebrated CCT trial aimed at removing the former Kwara State Governor.
The uproar and opposition against Amaechi’s nomination as a minister however provided the opportunity for Saraki to negotiate an escape route from his traducers in the APC and the Aso Rock presidential villa, Abuja.
The President of the Senate was said to have agreed to play along with the APC leadership to get Amaechi confirmed as minister ‎ in exchange for charges against him in the CCT to be dropped by the Federal Government, a script which was duly executed penultimate Thursday.
Top‎ sources disclosed to National Daily that Tinubu remains upbeat that his candidate for Senate President was supplanted by Saraki through deft manoeuvring and had therefore vowed to pay back. Buhari and other APC leaders were equally said to have aligned with Tinubu.
Indications that all may not be well emerged after the Court of Appeal ‎ruled that the CCT trial should go on, a decision which rattled Saraki’s camp, as the Senate President had hoped that the government will stand down the matter and subsequently withdraw the charges before the Tribunal.
With the stage set for Saraki’s trial early November, his key supporters admit that their only hope is to use the Supreme Court to buy time while seeking other avenues for rapprochement with the APC and President Buhari.
Meanwhile, PDP senators led by the Minority Leader of the Senate, Godswill Akpabio are said to be very angry with Saraki for not towing their position that Amaechi should not be screened or confirmed as minister.
It was gathered that the expectation from the PDP senators was they would be able to force the APC Government to backtrack on the current anti-corruption war  ‎which seemed directed at perceived enemies and some targeted individuals.
Knowing that government was desperate for Amaechi to be cleared and giving their stiff opposition to the nomination, the PDP were convinced that the process would be deadlocked, thereby paving way for negotiations on the anticorruption war.
The PDP senators were therefore said to be very bitter that the President of the Senate did not succumb to their plot and are said to have vowed to withdraw their backing for Saraki to continue to retain the position.
Said a source: “Senator Saraki thinks he’s smart. But he’s like a man between the devil and the blue sea. He knows that the APC leaders and President Buhari are not to be trusted. The day PDP decides not to back him the tenure of the Senate President is over. And I am not sure PDP would not be forced to pull out now”.

Share this on WhatsApp
Related Topics:Saraki' s CCT Trial
Up Next

US investigating Toyota over suspicious aiding of terrorists