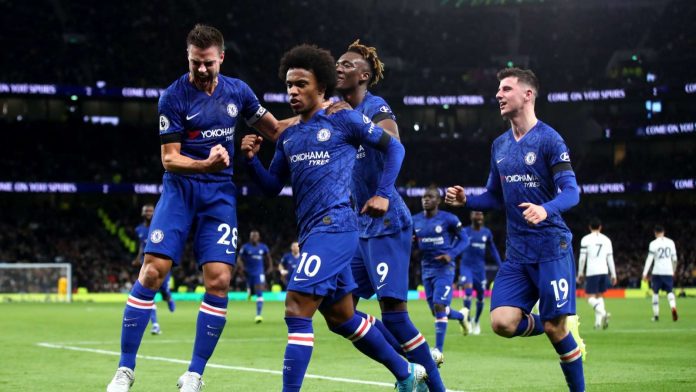 Willian and Frank Lampard got the better of their former manager Jose Mourinho as Chelsea seemingly set their Premier League campaign back on track with a 2-0 win at Tottenham in an ill-tempered London derby.

Indeed, Tottenham would have leapfrogged the Blues into fourth with victory, yet Willian scored twice before half-time – the second from the penalty spot after a remarkable Paulo Gazzaniga error.

Son Heung-min was sent off for kicking out at Antonio Rudiger with 28 minutes left, and Lampard’s men cruised to the finish at Tottenham Hotspur Stadium.

The game was interrupted as referee Anthony Taylor addressed the two coaches, however, with Rudiger reporting an incident of racist abuse.

After four defeats in their prior five league matches, this represented a much-needed win for Chelsea, ensuring a four-point buffer to fifth-placed Sheffield United at Christmas – with Mourinho’s Spurs back in seventh.