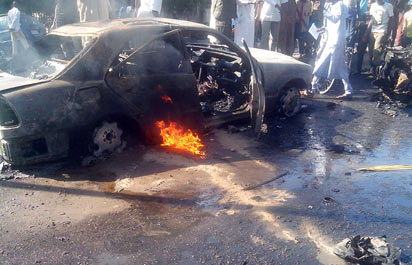 A child suicide bomber has detonated a bomb scrapped to his body killing himself, two other bombers and more than seven others in Borno state.

The attack was said to have happened in Beninsheikh, Borno state late in the night on Sunday.

The three suspected suicide bombers were said to be aged between 10 and 15 years. Before detonating the bomb, they were stopped for security screening by
civilian vigilantes in the area.

According to the Director, Army Public Relations (DAPR), Colonel Sani Usman said in Abuja on Monday that one of the bombers, who was strapped with explosives, detonated the bomb, causing the “death of nine people while 24 others sustained various degrees of injuries.”

Col Usman who said the three suicide bombers were among the dead, adding that “The security and emergency management agents have mobilized to the scene. The bodies have been evacuated and all those injured are receiving medical attention,” he said.

For some months now, cases of child suicide bombings – many by young boys and girls – are increasing exponentially.

This has culminated to wrecking havoc killing several Nigerians and destroying billions of properties in the last few years.

It would be recalled that President Muhammadu Buhari gave a mandate to the military commanders to rout out Boko Haram insurgents by December 2015.