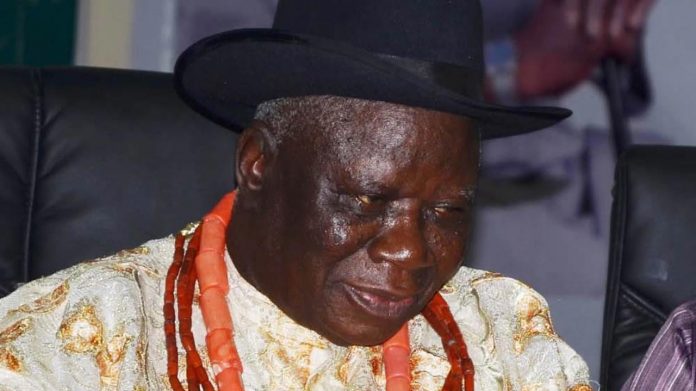 Leader of the Pan-Niger Delta Forum (PANDEF), Chief Edwin Clark, has picked holes in some of the provisions contained in the new Petroleum Industry Bill passed by the National Assembly last week.

Recall that both the Senate and House of Representatives passed the bill last week but with some disagreement, especially in the area of percentage that should be allocated to host communities.

However, reacting to some of the provisions in the bill, Clark, who is also the leader of the Southern and Middle Belt Leaders Forum (SMBLF) condemned the provision and allocation of 30% of profits for further frontier oil exploration in the north and that it was fraudulently added.

Describing the new bill as unjust and embarrassing, Clark said the passed PIB does not reflect the long clamour by the people of the region for equity, fairness and justice.

Clark, who was represented at a press conference in Abuja by PANDEF’s National Publicity Secretary, Ken Robinson, declared that the region has had enough of the colonial oppression and will be resisting it.

Clark, a former federal commissioner of information, rejected the passed bill, stressing that the three per cent for host communities as passed by the Senate was embarrassing to the people of the region.

He warned that Niger Delta will take their destinies in their hands and deny International Oil Companies (IOCs) entry into the region should the National Assembly fail to reverse the passed bill.

He said, “Given the depth of ingratitude expressed and delivered after decades of exploitation and neglect of the region, the entire people of the Niger Delta region, for and on behalf of the host communities, vehemently reject the following aspects of the bill: the 3% and 5% of Operating Expenditure granted to the Host Communities; the fraudulent and provocative 30% provision for the Frontier Exploration Fund.

“And now demand: the PIB must be reversed, reviewed and amended to ensure that the Oil-Bearing Communities must now receive not less than 10% of Operating Cost.

“If this is not done, the Niger Delta people may be forced to take their destiny into their own hands and all IOCs may find themselves denied access to their oil activities in such communities.”