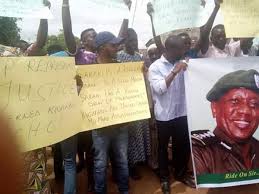 A group of Ilorin citizens on Monday rallied in support of IGP Ibrahim Idris over the transfer of cultists allegedly linked to Senate President Bukola Saraki to Abuja.

Saraki then raised the alarm that the transfer of some of the suspects from Ilorin to Abuja was to rope him into a murder.

But the protesters, under the Coalition of Concerned Kwara Citizens, marched round the Adewole Estate area, displaying placards with different inscriptions like: ‘Vote of confidence in IGP,’ ‘Let justice prevail,’ and ‘Kwara workers are hungry, while cultists are feeding fat.’

The group’s spokesman said the movement of the suspects from Ilorin to Abuja was a normal procedure in police investigation.

“There is no need for anybody, including the Senate President, Dr. Bukola Saraki, to entertain fear about the development,’ said Gbadeyan James.

According to him, this is not the first criminal matter to be transferred from Kwara State to Abuja.

He cited the 2003 election that ushered in the administration of Saraki as governor, when allegations were made against some Ilorin indigenes on plans to bomb Saraki’s National Pilot newspapers’ office.

“The case was eventually moved to Abuja. Similar cases that were transferred to Abuja from Kwara included the Fulani/vigilante group clashes in Alapa, in the Asa Local Government Area of the state. The Offa poly students/OPC and Oro Ago Fulani/farmers crises were also transferred to Abuja,” he said.

The group said considering the peculiarity of the cultists matter, Abuja was the appropriate place to handle the case to ensure diligent investigation and prosecution, as well as reveal sponsors of the crime.

He appealed to Chief Justice of Nigeria Walter Onnoghen to advise the leadership of the Kwara State judiciary not to allow itself to be used on matters that were outside its purview.

“We will not relent in bringing justice to the matter. We shall go beyond the shores of this land to get it and we shall do all within to ensure that party politics is not used to scuttle the course of justice,” he added.