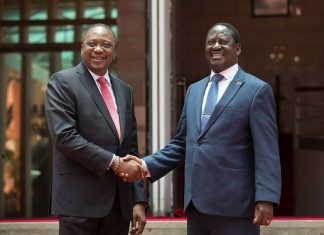 The Secretary-General of Commonwealth, Patricia Scotland is set to make her first official visit to Kenya later this week.
According to a statement signed by the Director Media and Public Relations, communication division, Barnie Choudhury, Scotland will meet with President Uhuru Kenyatta, government ministers and Raila Odinga, the former prime minister.
“Kenya is a much-valued member of the Commonwealth family,” said the Secretary-General. “This visit is a welcome opportunity to convey in person my appreciation for the positive development which has taken place, with agreement being reached between President Kenyatta and Mr. Odinga.
“I commend their decision to launch an initiative which aims to unite all Kenyans. We in the Commonwealth stand ready to provide support in any way we can.”
Secretary-General Scotland will also outline the Commonwealth’s priorities, including preparations for next month’s Commonwealth Heads of Government Meeting (CHOGM) in London, as well as discussing possible areas of collaboration. These include legal, economic, climate change and ocean governance related issues.
The Secretary-General will attend the 20th anniversary event of the East African Business Council (EABC), where she will emphasise the importance of the Commonwealth Advantage when member countries trade with one another.
Secretary-General Scotland will continue to promote the role of youth in the Commonwealth, where 60 per cent of its citizens are under 30, when she meets law students at Nairobi’s Strathmore University.
“The law students will focus on a policy discussion on domestic violence,” she said. “It’s an area I have specialised in and made a personal priority throughout my career. I continue to carry this forward in practical and innovative ways as Secretary-General.”