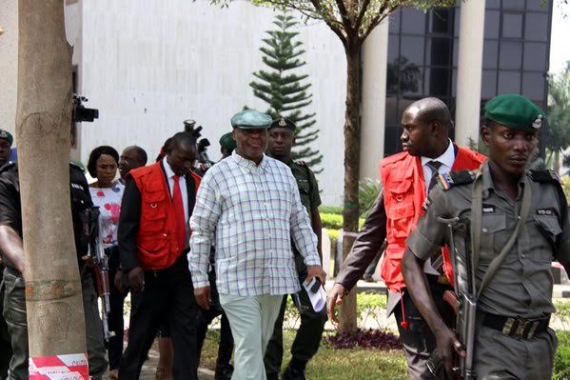 Share this on WhatsApp
Spread the love
The Federal high Court sitting in Abuja, this Wednesday, fixed Thursday for the hearing of bail application made before it by High Chief Raymond Dokpesi. The Chairman Emeritus of Daar Communications Plc, had on the commencement of the case this Wednesday, pleaded not guilty to all the charges against him.
The presiding Judge, Justice Gabriel Kolawole, thereafter, directed that Dokpesi be remanded in the Economic and Financial Crimes Commission (EFCC) custody pending the hearing of his bail application by 12.30pm on Thursday.
The Economic and Financial Crimes Commission brought six count charges of money laundering and procurement fraud related allegations against the Chairman Emeritus of DAAR Communications Plc before the High Court in Abuja.
The EFCC accused Dokpesi of receiving N2.1 billion from the office of the National Security Adviser between October 2014 and March 19, 2015 for the Peoples Democratic Party (PDP) presidential media campaign. The EFCC contends that acceptance of these funds is in breach of provisions of the Public Procurement Act, Money laundering Act and the EFCC Act.
Dokpesi has been in the detention of the EFCC before the hearing of the suit commenced legally.
Share this on WhatsApp
Related Topics:
Up Next

NNPC rules out sales of refineries