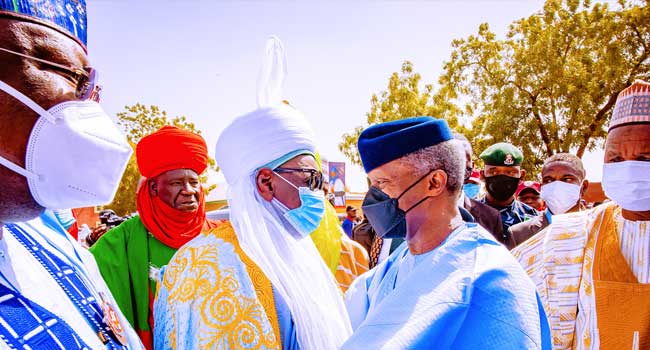 The Daura Emirate Council on Saturday turbaned the son of President Muhammadu Buhari, Yusuf, as the Talban Daura in Katsina.

The Emir of Daura, Dr. Umar Farouk Umar, noted that the chieftaincy conferment was in recognition of President Buhari’s performance in the leadership of the country which has brought unprecedented development to the emirate. The Emir of Daura, therefore, commended President Buhari for his leadership qualities, adding that power belongs to God and He gives it to whoever He pleases.

Emir Umar explained that the Daura Emirate Council resolved to show gratitude to President Buhari and his family with the conferment of the traditional title on Yusuf Buhari, since the President cannot take any such traditional title being the country’s leader.

The Emir said that Daura has been transformed under the administration of President Buhari, commending the president for the magnitude of development recorded in the emirate in his administration.

The Emir of Daura, Dr. Umar Farouk Umar, also noted that the Katsina State Government has been working hard to end the difficulties of the masses.

In attendance at the turban of Yusuf Buhari on Saturday were the Vice President, Prof. Yemi Osinbajo; President of the Senate, Ahmad Lawan; Governor of Katsina State, Aminu Masari, the President of the Deputy Senate, Ovie Omo-Agege; Governor Abdullahi Ganduje of Kano State, Minister of Aviation, Hadi Sirika; Senator Kabiru Gaya, a Member of the House of Representatives, Hafiz Ibrahim; including several other members of the National Assembly.

Emir Farouk Umar noted that Vice President Osinbajo is as an honest trustworthy man who keeps his promise and is patient.

The Emir stated: “The Vice President is a nobleman who keeps his promises and a trustworthy person who has so much patience and knows what to do at any given time. He is a very good man; he is my favorite person. He is a very nice and honest man.”