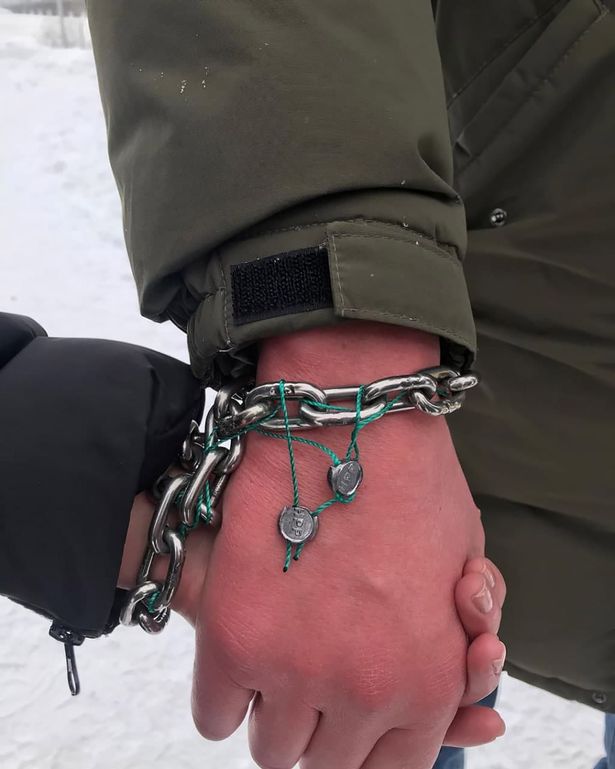 Alexander Kudlay, 33, and Viktoria Pustovitova, 29, from Kharkiv in Ukraine, spent 123 days together – but admitted their efforts to repair their on-off relationship didn’t work.

As their chain was finally severed by giant cutters in Kyiv at the Unity monument where they were locked together, the pair said they couldn’t wait to go their separate ways.

“I want to live my own independent life, and grow as an independent person,” said Viktoria, who shouted ‘Hooray’ as she was cut free.

“I am finally free,” she added.

Alexander, who came up with the idea after Viktoria said she wanted to break up, thanked their supporters, who followed their unusual journey on Instagram.

He said: “Thank you all for supporting us. Look, we are now at a distance from each other.

“We were happy, and we are now happy to have had this experience in our lives.”

For nearly three months, the couple had no personal space and did everything together, from bathroom breaks to grocery shopping.

Unsurprisingly, the pair said the lack of privacy had cost them their relationship and their wedding plans.

The writing has been on the wall, with Alexander updating their followers on Instagram about the issues.

He admitted: “Difficulties are snowballing.

“As soon as we find one plus in a situation, immediately there are two minuses. Vika wants to get back to the rhythm of her earlier life, she misses what she used to love to do.

“She doesn’t respond well to my suggestions to keep doing what she likes to do alongside me.”

And he said he was fed up being stuck alongside her as she did her makeup every morning.

“We are trying really hard not to escalate conflicts,” he said.

“I struggle with hearing noise when I cook, or on the phone. And I don’t like to spend so much time by the mirror every morning.” 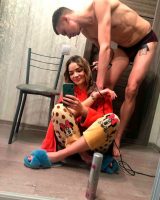 After a four-hour argument, he posted: “Our resources are running dry. We need to relax in a big crowd, to let go of each other.

“We need to reboot. When we go shopping, we start fresh and happy, and finish up like squeezed lemons.”

Now they will live in separate regions of Ukraine, starting immediately.

A month ago, Viktoria also admitted it was tough, saying: “We are a bit fed up with each other. It is complicated for me…

“I was nervous, am nervous and, probably, will continue to be nervous. Yes, I had flashes where I wanted to remove the chain, and jerked it.

“But then time passed, I calmed down.”

At the beginning of the experiment, the couple said they hoped to find a way to resolve arguments, without one or the other leaving.

To make thing easier, they had extra zips sewn into their clothes in order to dress and undress easily.

On May 19, it was announced that they had broken both the Ukrainian and world record for the most time spent chained together as a couple.

The pair had vowed to remain chained until they got married – despite not getting formally engaged.

They had hoped to make millions from the stunt and pledged to donate some of the cash to charity.

“We want to donate $2million £1.4million to charity and are currently negotiating. We will leave $1million £700,000 for our personal use,” Alexander previously said.

During their time chained up, Viktoria had accompanied Alexander to his work selling cars and parts.

But she had to give up her job creating artificial eyelashes because her clients did not want her boyfriend close by as she did it.

The unchaining was supervised by Ukrainian records chief Vitaly Zorin.
He said: “Since this is Vika’s first free evening, I’m going to introduce myself to her.”