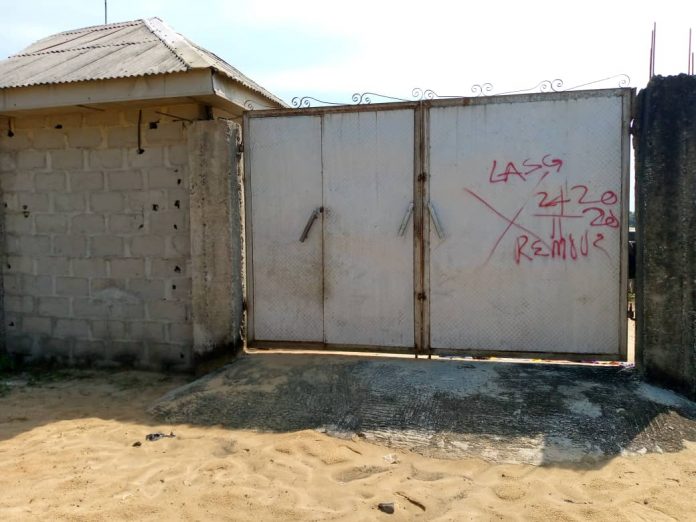 Residents of Egan-Ofiran Kayetoro community in Ibeju-Lekki area of Lagos state have called on Governor of Lagos state, Mr. Babajide Sanwo-Olu to wade into the on-going crisis in the community as New Town Development Authority, NTDA, under Lagos state has concluded plans to demolish over 100 houses in the area.

The development, the residents said, is devastating and capable of rendering hundreds of families including children and women homeless.

The save our soul call is against the backdrop of several demolitions carried out by the NTDA officials during the COVID-19 lock down, which rendered many residents and communities around Ibeju Lekki homeless. This is as a result of the continued efforts by  NTDA to unleash mayhem on residents of Ibeju Lekki, Lagos State.

Officials of NTDA on Wednesday, November 24, 2020, served a five-day notice to the entire community to remove their buildings from the area or risk demolition.

Some residents of the community told Vanguard that the situation on ground is devastating as officials of NTDA have concluded plans to render the people in the community homeless.

According to them, “When we received the letter on Wednesday, November 24, 2020, we paid a visit to the office of the General Manager of New Town Development Authority, NTDA, Mr. Olakunle Aboyeji at Folawewo off Ogunlana Street, Allen Avenue, Ikeja. “Unfortunately, the man was not ready to listen to us. Rather, he drove us out of his office.

“He told us that, there was nothing we could do about it as plans were on ground to demolish all the houses in the community, that the entire community belongs to Lagos State Government.

“We are calling on Lagos State Governor, Mr. Babajide Sanwo-Olu, the National Leader of the All Progressive Congress, APC, Asiwaju Bola Ahmed Tinubu, all Royal Fathers in Ibeju Lekki, elders, leaders, politicians and well wishers in Ibeju Lekki to save us. We do not want to be rendered homeless”, they cried out.

Another resident said, the situation is pathetic as the land owners, ‘Omo Oniles’, are confused on the next line of action.

“NTDA served the community a letter stating, “illegal development” in a fenced area. We have explored all avenues to address this issue but it seems, the officials of NTDA, have made up their minds to unleash havoc on us especially this time that we are faced with COVID-19 pandemic in the country.

“We are crying out so that people can come to our aid, perhaps, they can save us from this predicament. We do not want to lose our lives and properties. We have been experiencing demolition in Ibeju Lekki area of Lagos State in recent times and that is why we are crying out.

“It is wicked for the government of Lagos State to come with the mindset of demolishing our houses and render our children and wives homeless.

“For almost eight months, we have been battling with coronavirus pandemic,  aftermath of EndSARS protest has rendered ourselves miserable and we have come to a point where the second wave of recession is fighting us as citizens of this country, Nigeria. We pay our taxes and we are law abiding citizens of Lagos State.

“In this community, we have more than 200 houses, our children are in their hundreds, our wives and means of livelihood are threatened by officials of Lagos state from the ministry of Land, New Town Development Authority,  who have decided to render us homeless.

“We are begging Nigerians; we are calling on Asiwaju Bola Ahmed Tinubu, Jagaban of Lagos to save us from becoming homeless.

“They want to take our means of livelihood from us. We are begging them to leave us alone.

“We are open for negotiation, ratification of the land as well as other efforts to ensure that we secure the land. We will be happy if the media can support us in this fight. Let the world hear what is going on in Ibeju lekki. Save our lives”, they cried out.