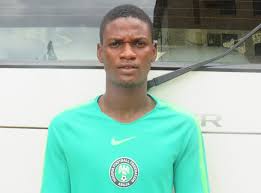 Golden Eaglets captain, Samson Tijani who was voted the Man of the Match against Hungary believes the team will improve their performance when they face Ecuador.

Tijani who scored two goals against Hungary praised his teammates for putting in a strong character to comeback and win the game after going down twice in the encounter.

Speaking after game, he also thanked the fans for their support during the difficult encounter while urging them to keep supporting the team.

”I am really grateful for everything and I really thank all the players for putting their efforts in this game to comeback and win the game, I thank God for everything.”

”I thank the fans for supporting us, I really thank God for that.”

”They should keep supporting us and I just believe with my teammates we are going to do better against Ecuador”.

The five times champions who are top of Group B on goal difference will have a chance to make it to the knockout stage with a victory over their South American counterpart.

Share this on WhatsApp
Related Topics:EcuadorGolden EagletsSamson Tijani
Up Next

Why Ronaldo didn’t want to watch Messi vs Real Valladolid