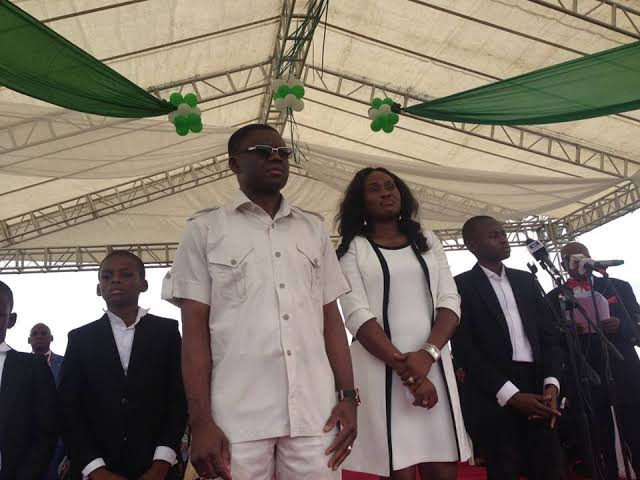 The All Progressives Congress (APC) in Edo State has raised alarm of threat to the peace deal agreed to by all stakeholders in the governorship election in Edo State at the Oba’s Palace in Benin City.

The APC on Saturday protested that a video has gone viral on the social media exposing that Deputy Governor Philip Shaibu of Edo State threatening violence against anyone associating with APC supporters; the party noted that this constitutes a breach of the peace deal supervised by the Oba of Benin.

APC further said that the wife of Deputy Governor Philip Shaibu, Mary-Ann Shaibu, further took a violent cue from her husband, when she spat fire, threatening to flog any woman, she sees associating with a group, which is suspected to be an affiliate of the main opposition party, APC, in Edo.

APC Media Campaign Council accordingly protested that “this violates the rights of Edo people which grants them freedom to associate with anyone within the ambits of the law and the recent peace deal convoked by the Oba of Benin, Oba Ewuare II.”

Apparently, the Chairman of the APC Media Campaign Council, John Mayaki, in a statement indicated that decried that the viral video shows the wife of the Deputy Governor who was seen gesticulating wildly and requesting the picture of every woman attending the meeting she was addressing be captured, vowing afterwards that anyone of them found identifying with another group would be flogged with the cane.

Mayaki declared: “The sense of urgency and desperation in the tone of Mrs. Shaibu, who has been making frantic but futile moves to boost the chances of the temporary ruling party, PDP, in Edo North, through a series of meeting with women at different parts of the region, is no doubt as a result of the chill wind reaching her.

“Although, women openly support her to enjoy what pleasures they could, she had realized, they secretly intended to vote for APC.”

“Every step of the campaign, they have brutalised us, and unleashed weapons of warfare. But they are making martyrs of us. All we want is good governance in Edo State and now she is threatening to whip us.”