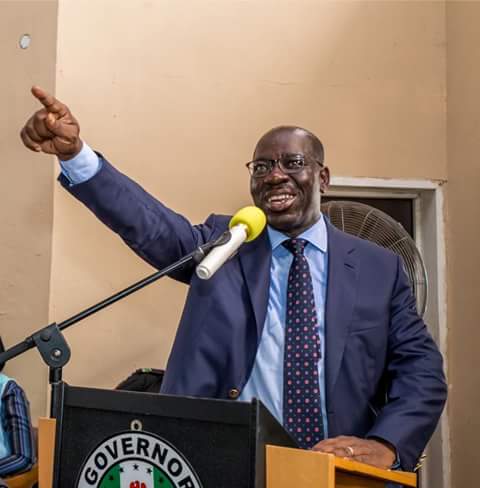 The APC in Edo has not been having it easy lately in spite of the state government effort to hold up a make-believe that all is well between the ruling party and Gov. Godwin Obaseki.

The crisis is not unconnected with the 2020 guber race. Obaseki wants another term; the state party leaders think he doesn’t deserve it.

Worse is the fact that the APC national chairman Adams Oshiomhole is at loggerheads with his godson Obaseki and his administration, and the rift has further divided the party.

The signs are obvious.

Apart from the widening gap between the two (both of have not been seen together in public for months) the last two events in the state showed the acrimony is worsening.

Oshiomhole didn’t grace the get-together the governor organized for the APC lawmakers-elect from the last general elections.

But Obaseki insists all is well.

“The rumoured rift between me and my predecessor is fake news,” he said recently.

The governor’s resumption from a month-long vacation was supposed to have some fanfare—right from the airport. But miscommunication and rank pulling amongst his top aides botched the arrangement.

While his loyalists still went ahead last Wednesday to receive him at the airport, a group of heavyweights and party men loyal to Oshiomhole huddled inside the Buhari Campaign Organisation’s office scheming.

The talking point was Obaseki, his alleged colourless performance, the thrashing the party got in Edo south during the Feb 23 election, and the likely loss of the party if the governor gets another chance.

The group agreed Oshiomhole will work together with the party to produce a governorship candidate capable of winning the 2020 governorship election.

“The party would have been kicked out of the governorship election if election held in the state now,” said Evbuowa.

Another member lamented the ill-treatment they get after working for Obaseki to win the last guber election, and rather than consider them, the governors is bringing in members of the Lagos crowd and others from Delta.

“If they say they are not sharing money, we have no problem with that,” said Tony Kabaka Adun. “But we have not even seen the development they promised to give us with the money. All we are still seeing today are Oshiomhole’s legacies which they are trying to destroy.”

Many of them said they are still in the APC till now because of Oshiomhole. But that might not be forever.

“If Oshiomhole decides to support Obaseki again in 2020, we, for the first time will go against Oshiomhole,” he said.

The national chairman has yet to speak on the sour relationship with the governor. That still leaves a lot of things up in the air,  including an alternative to Obaseki.