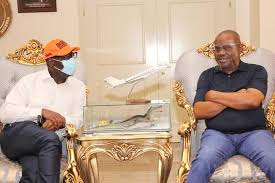 Rivers Governor Nyesom Wike has proved once again he’s a wild card in the PDP any time, even in a perilous circumstance like it is in Edo now.

The APC and PDP are contesting the September guber election in the state. Their candidates Ize Iyamu-Osagie and Gov Godwin Obaseki respectively are supposed to be enemies now, including their supporters, too.

But Wike, the chairman of the PDP campaign council for the election, is bucking the trend, after a verbal missile exchange between him and Kano Gov Umar Ganduje chairing the APC campaign council.

Another irreverent press release credited to Wike got out Friday. It whitewashed Ganduje’s vice chairman and Imo Gov. Hope Uzodinma, describing him as high ranking fraudster.

“When governors are talking, Hope Uzodinma shouldn’t talk because he is an internationally recognized fraudster who stole a mandate that does not belong to him through the help of his APC cabals and tomorrow if democratically elected governors are talking, someone declared governor through the back door will come out and talk too,” the Rivers governor allegedly said.

He was responding to Uzodinma’s earlier boast that the APC will teach the PDP and Wike how to win a free and fair election.

Wike had much earlier called Ganduje a dollar-hog, referring to a video that trended years ago showing the Kano governor loading wads of greenbacks into his babanringa and cap.

So it would not have been out of place if Wike had showed Uzodinma, too, the full length of his tongue.

But Wikes’s commissioner for information and communications, Paulinus Nsirim, in a statement, said the comment never originated from his boss.

“The concocted story only existed in the imagination of the authors and so there was also no disparaging comment by Governor Wike,” said Nasirim.

“Members of the public are hereby advised to discountenance all the information contained in the said publication as they did not emanate from Governor Wike.”

Obaseki may feel gutted reading this denial by Wike.

Whatever barbs fly around during the campaign and election are supposed to be acceptable. After all, all is fair in war and love.

But the Edo governor has reason to fret.

Wike pulled out of the conciliatory jaw-jaw that brought Obaseki to securing the PDP guber ticket days after defecting to the PDP from the APC.

A federal high court in Rivers even nearly granted a restraining order against Obaseki as one of the aspirants loyal to Wike flew to court to resist the party decision granting the governor a waiver.