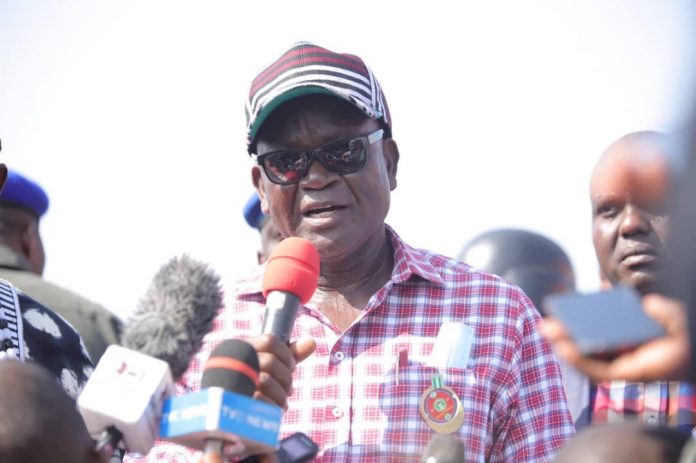 Benue State Governor, Samuel Ortom has revealed that his Kaduna state counterpart, Nasir El-rufai was only trying to warm his ways back into the presidency as he claimed the diminutive governor had long fallen out with Aso Rock.

Ortom’s comments are coming after Governor El-rufai was quoted to have alleged that his Benue colleague was attacking the federal government over insecurity in his state just to cover his own failures as Governor.

Governor Ortom through his Chief Press Secretary, Terver Akase, said El-rufai did not deserve the attention of Nigerians as Kaduna state under his leadership had become one of the most unsafe places to live in Nigeria.

“El-Rufai’s attack on Governor Ortom is merely to make him look good before the Presidency. He has apparently fallen out of favour at the Villa and wants to use Governor Ortom as a Launchpad back to reckoning.

“His statements on the abduction of Chibok girls and several other acts of terrorism are still fresh in our minds. El-Rufai is on record to have said repeatedly that Fulani people must retaliate for any wrong done to them no matter how long it takes.

“Is Governor Ortom responsible for El-Rufai’s inability to ensure peace in Kaduna State where bandits have taken over some communities while kidnappings and killings occur on a daily basis?

“Kidnapping has become a common crime in Kaduna State under Nasir el-Rufai. Aside from the much-celebrated cases, it has been estimated that at every given time, not less than 300 persons are abducted in Kaduna by kidnappers who are always identified as El-Rufai’s kinsmen.

“Kaduna governed by El-Rufai is one of the most unsafe places to live in Nigeria today.

“Nasir el-Rufai doesn’t possess the credentials to counsel anyone on payment of salaries and the welfare of workers. This is a Governor who recently sacked 4,000 workers for no just cause. He ought to be ashamed of himself. What happened to the lofty promises he made to the Kaduna people in 2015?

“The Kaduna Governor should know that only two days ago, the people of Benue State met at a stakeholder meeting in Makurdi and unanimously passed a vote of confidence on Governor Ortom in recognition of his performance. That meeting was attended across party lines with leaders of All Progressives Congress, APC also present.

“El-Rufai must note that Benue State will not repeal the Open Grazing Prohibition and Ranches Establishment Law no matter the amount of blackmail, hatred and threats they wage against Governor Ortom.

“We advise the Kaduna State Governor to focus on addressing the numerous problems in his state and leave Governor Ortom to lead Benue in peace,” the statement added.