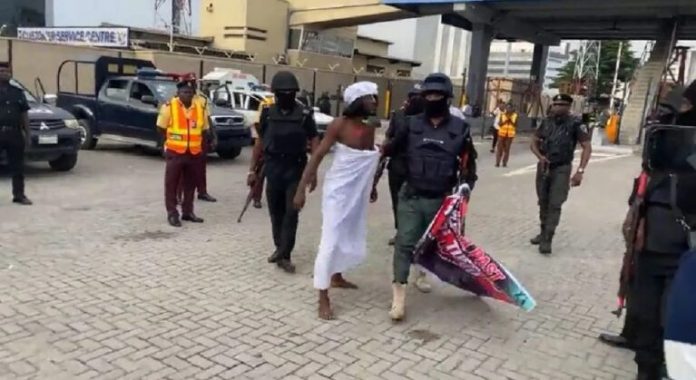 President Muhammadu Buhari and governor Babajide Sanwo-Olu of Lagos State on Wednesday descended on Nigerian youths who were on peaceful one year anniversary mass action at the Lekki Tollgate, Lagos. Two persons were arrested Wednesday morning by the Police at a car procession venue at the Lekki tollgate, Victoria Island, Lagos State.

The police were alleged to have beaten the two victims, collected their phones, and other personal effects with them.

One of the victims, monitored on Channels Television on Wednesday morning from Lagos, lamented: “I did not do anything.

“They beat me, they collected my phone, they took my money; the police have not learnt their lessons.”

The police, thereafter, took both young men into a waiting Black Maria belonging to the Lagos State Task Force, then, the vehicle drove off to unknown destination.

As relayed on Channels TV, the police occupied the Lekki Tollgate venue, while operatives of the Lagos Neighbourhood Safety Corps (LNSC) were sighted clearing the road for free flow of traffic.

The #EndSARS Movement in 2020 in protest of police brutality turned ‘bloody’ on October 20, 2020, during the evening shooting of peaceful protesters at the Lekki Tollgate venue. The shooting commenced few hours after Governor Sanwo-Olu declared curfew in the state. Though, the peaceful protest was hijacked by hoodlums, according to the government, who were burning police stations, government properties in Lagos.