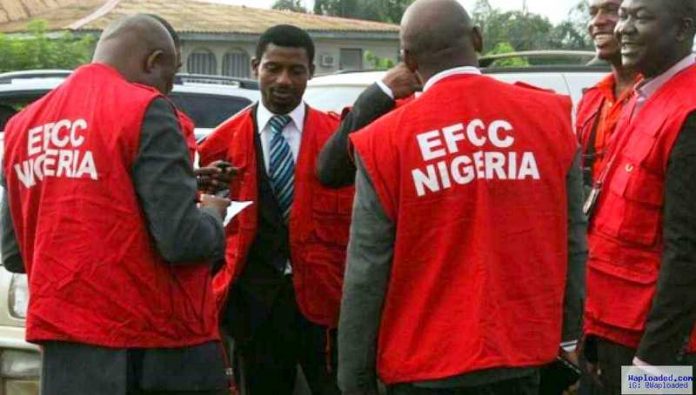 An Executive Director with the Niger Delta Development Commission (NNDC) in charge of Projects, Engr Tuoyo Omatsuli and three others were on Thursday, November 8, arraigned by the Economic and Financial Crimes Commission (EFCC) before a federal high court sitting in Lagos for N3.6bn fraud.

In a 45-count charge sheet seen by National Daily and signed by the Deputy Chief Detective Superintendent for the EFCC, Ekele .E Iheanacho,  Engr Tuoyo Omatsuli, Don Parker Properties Ltd, Francis Momoh and Building Associates Ltd, were said to have between August 2014 and September, 2015  conspired to disguise the illegal origin of the total sum of N3, 645,000,000.00 being proceed of unlawful activity to wit: Corruption and Gratification and thereby committed an offence contrary to section 18 of the Money laundering Prohibition Act 2011 as amended by Act No.1 of 2012 and punishable under section 15(3) of the same Act.

Omatsuli, in count two of the charge sheet was said to have within same period did procure Francis Momoh and Building Associates Limited to use the total sum of N3,645,000,000:00 paid by Starline Consultancy Services Limited into Diamond bank Plc Account No 0023785116 operated by Building Associates Ltd when he ought to have known that the said sum formed part of the proceeds of unlawful activity to wit: Corruption and Gratification, thereby committing an offence contrary to section 18© of the money Laundering Prohibition Act 2011 as amended by Act No 1 of 2012 and punishable under section 15© of the same Act.

The court took the detailed plea of the defendants who all pleaded not guilty, and they subsequently remanded in custody as one of the suspects, Francis Momoh was said to require urgent medical attention.

The Judge therefore ordered that the defendants been remanded in the custody of the EFCC till November 16 when their bail application will be heard.

It would be recalled that National Daily had reported in May this year that the EFCC got a temporary order from Justice Chuka Obiozor of the Federal High Court, Lagos to seize some properties worth N1.8 billion allegedly belonging to Tuoyo Omatsuli.

The counsel to the applicant, Ekele Iheanacho, had detailed how a contractor with the NDDC, Starline Consultancy Services Limited, was paid N10.2 billion as consultancy fee for levies collected from oil processing companies in the Niger Delta Region.

He further said that out of the money paid to Starline, N3.6 billion was paid as kickback to Omatsuli through a company named Building Associates Limited.

Iheanacho also told the court that one Francis Momoh, who is described as the majority shareholder in Building Associates Limited, was introduced as a shareholder in Don Parker Properties Limited so as to disguise the nature of the crime.