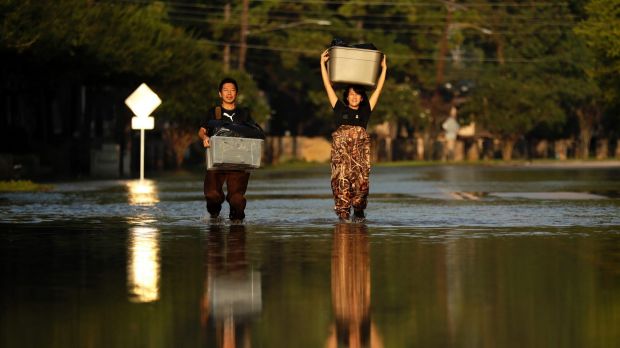 Share this on WhatsApp
Spread the love
By Boluwatife Ezekiel Olaleye
Hurricane Irma strengthened into a highly dangerous Category 5 storm on Tuesday as it barrelled toward the Caribbean and the southern United States, threatening deadly winds, storm surges and flooding, as Texas and Louisiana still reeled from devastating Hurricane Harvey.
Hurricane warnings were in effect for much of the Leeward Islands, the British and US Virgin Islands and Puerto Rico ahead of the storm packed winds of up to 280 km/h on Tuesday, the US National Hurricane Center (NHC) said.
“Irma becomes an extremely dangerous Category 5 hurricane,” the NHC said on Tuesday, adding that it could gain even more strength. “Preparations should be rushed to completion in the hurricane warning area.”
Puerto Rican Governor Ricardo Rossello, who has declared a state of emergency and activated the National Guard, urged the economically struggling US territory’s 3.4 million residents to prepare for the potentially devastating storm.
“There is no positive sign that it’s going to go in another direction. We’re expecting that it’s coming at Puerto Rico with force, and we’ve got to be ready for it,” he said at a news conference.
Irma was about 440 km east of the island of Antigua and moving west at about 22 km/h, the NHC said.
Lisa Ferguson, the owner of the Esperanza Inn on the Puerto Rican island of Vieques, said her 15 guests left on Sunday and that staff put up hurricane shutters for the storm’s expected passage to the north on Wednesday.
But there no signs of a looming hurricane on Tuesday, with clear skies, a fresh breeze and singing birds, she said.
“It’s kind of ominous, knowing that it’s out there. But it’s perfect,” Ms Ferguson said by telephone. “We’re bunkering down.”
ALSO SEE: Hurricane Irma could be stronger than devastating Hurricane Harvey
Telemundo TV station WIPR in Puerto Rico showed long lines of shoppers stocking up on bottled water, flashlights, batteries, generators, food and other items.
Irma also threatened the US East Coast, especially Florida, which was under a state of emergency. The hurricane centre expects Irma to reach southern Florida on Saturday.
Florida Governor Rick Scott said on Twitter late Monday he had spoken to US President Donald Trump, who “offered the full resources of the federal government as Floridians prepare for Hurricane Irma.”
The NHC cautioned it was too early to forecast the storm’s exact path or what effects it might have on the continental United States, but warned of likely effects on some areas this weekend.
Irma would be the second powerful hurricane to thrash the United States and its territories in as many weeks.
Residents of Texas and Louisiana are still reeling from the catastrophic effects of Hurricane Harvey, which struck Texas as a Category 4 hurricane on August 25 and dumped several feet of rain, destroying thousands of homes and businesses. Harvey has killed an estimated 50 people and displaced more than 1 million others.
Share this on WhatsApp
Related Topics:Category 5 stormHurricane Irma
Up Next

For the first time, UK is home to the world’s top two universities

Probe my tenure of corruption if you have facts – Gov. Lalong