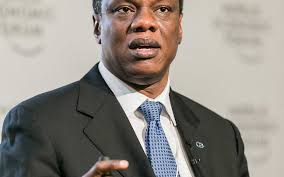 A global trend capable of stripping the power of financial and monetary regulations from central banks of countries to their telecoms regulators is emerging.

This was the submission of leading techprenuer and founder, CWG Plc., Mr. Austin Okere in his keynote presentation during a recent seminar organized by Nigeria Information Technology Reporters’ Association (NITRA), in Lagos.

He said in nations where telecoms are allowed to drive mobile money, control of financial activities is gradually tilting towards telecoms regulators. This made him to query how well are the banks and other financial institutions innovating and using digital technology to take advantage of the huge untapped potential in the smaller towns and cities and providing them with the required type and form of financial services?

Nasdaq has executed its first trade on a blockchain and promises to expedite trade clearing and settlement from 3 days to as little as 10 minutes.

Already, settlement risk exposure is reduced by over 99%

Other Stock Exchanges include Australia, Myanmar, Germany, Japan, Korea, London and Toronto are keying into FinTech.

Okere also disclosed that central banks are now seeking to issue their own national digital currencies to harnessing the upside of the digital revolution, preserving the existing legal and regulatory set up.

Some of the central banks are now expecting significant cost savings, reduction of operational and fraud risks, strengthened ability to execute monetary policy

Already, some central banks are now issuing digital currency units alongside notes and coins as base moneyStudy projected that broadening access to digital finance tools could increase developing countries’ GDP by an estimated $3.7 trillion by 2025

According to Okere, “Kenya, for example, “mobile money,” which allows users to transfer funds by text message, has helped an estimated 194,000 households escape extreme poverty. The breakthrough there was driven by changes in savings behavior and greater occupational choice, especially for women.

“Tanzania and Mexico implemented systems that require nothing more than a phone number to sign up for the most basic accounts. Programs in both countries have been successful; in Mexico, for example, more than nine million new accounts were opened in the first two years.

“India, meanwhile, is launching a massive digital identification program that collects fingerprints and other biometric data. More than one billion digital profiles have been created since the program began six years ago; today, more than one-third of those profiles are linked to bank accounts.

He noted that with the ease in transacting business with FinTechs, traditional banking is a very difficult time in some parts of the world, stressing that developed countries have typically led the way in traditional financial systems.

Already, emerging markets are leapfrogging to new forms of banking with Fintechs.

Key African example remains the MPESA which has made it possible for a large swathe of the Kenyan population to gain financial inclusion.

Just as 70% of the population in Africa is unbanked, MPESA has more than 60% of Kenya’s 33 million mobile users.

He revealed that a pointer to how mobile money will ravage the banking sector if it had been allowed to be driven by telecoms in Nigeria can be seen from how Diamond’s Yello Mobile Account changed the narrative on its customer base within record time.

Diamond bank had 7m accounts after 23 years, and added 6m more accounts within the first year of launching Diamond ‘Yello Account in partnership with MTN Nigeria. This shows the power of FinTech in stripping financial control powers from the central bank to NCC in the near future when other banks or platforms emerge with latest fintech products.

Fintechs thrives on digital currencies and mainly mobile money services while banks rely on cash and ancillary instruments. The growth in Fintech has forced almost every bank to key in with tailor-made products to remain competitive and industry relevant.

However, in Nigeria, Okere raised salient questions including; if we are following through with the strategy to deploy and sustain digitalized multi-channel approach like using handheld devices, mobiles, cards, micro-ATMs, branches and kiosks for agent banking, with appropriate structures to ensure seamless integration with the existing financial services?

The Columbia Business School, US lecturer also asked if we started making use of data analysis to make services more personalized and combat financial resilience.

He was optimistic that Fintech companies in both established and emerging markets have shown that with the right technology, it is possible to leapfrog to new forms of banking which can mesmerize the almighty powers of central banks after all.