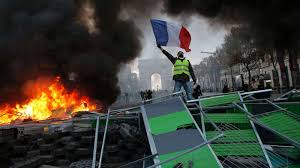 The violent protest over fuel tax by about 8,000 protesters in Paris entered its eight day on Saturday with no solution in sight.

As angry protesters blocked streets and lit various materials on fire, including large sheets of plywood and garbage bins, police hurled tear gas and shot water cannons on the crowds, the majority of which were centered near the Champs-Elysees.

Saturday was the eighth day of protests over rising fuel taxes and French President Emmanuel Macron’s economic policies. Since the protests began on Nov. 17, two people have been killed.

The protests carried on throughout the afternoon until the early evening.

At least 19 people, including four police officers, were slightly hurt during the protests while one person had more serious injuries.

Police told the AP that dozens of protesters had been detained for a variety of actions, including “throwing projectiles.”

Many so-called “Yellow Jacket” protesters could be seen donning the yellow vests French drivers are required to keep in their vehicles — a style that has become tied to the protests.

The protests began as an affront against rising diesel prices, which rose about 30 cents per gallon and are expected to continue rising, but over the past week, they’ve quickly phased into a rebuke on Macron, who many French citizens perceive as elitist and indifferent to their struggles.

Macron insists the higher taxes are necessary to reduce France’s dependence on fossil fuels and to fund renewable energy sources, according to the AP.

Share this on WhatsApp
Related Topics:franceFuel Tax
Up Next