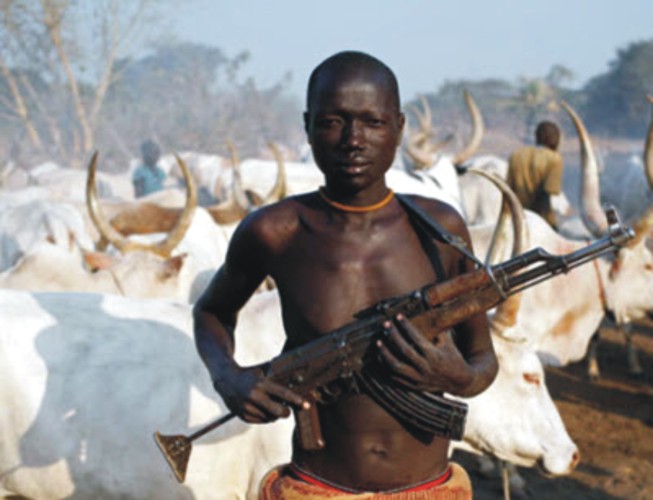 THE Fulani ethnic nationality is a unique brand of people in the sense that they are perpetually nomadic.

The nomadic nature of these people has made it impossible to precisely pin them down to any specific geo-political locale but for purposes of intellectual debate, the Fulani are Northerners of Northern Nigeria.

Lately, the Fulani have attracted a rash of commentaries around the issues of banditry, terrorism and the violence some of them have continuously unleashed on host communities whilst they are engaged in their cattle rearing activities.

There have been reported incidences of vandalism of farms and the killings of farmers caused by these Fulani herdsmen just as their dastardly criminal acts of blood cuddling attacks of farming communities have assumed frightening dimensions since one year ago when Major General (rtd) Muhammadu Buhari of the All Progressive Congress was inaugurated as the president of the Federal Republic of Nigeria.

Sadly, the current government has through its ineptitude and conspirational silence attracted suspicions from across Nigeria who have drawn a conclusion that the Muhammadu Buhari’s administration tacitly endorsed these murderous campaigns of the Fulani herdsmen who are kinsmen of Mr President.

In the last count, the Fulani herdsmen have been pointed at as those who have engaged in the high profile kidnap of notable politicians, military officers and clerics just as the two prominent incidents involved the kidnap of an Enugu State based catholic priest, Rev. fr. Aniako Celestine and the erstwhile secretary to the government of the Federation, Chief Olu Falae.

Between Abia/Enugu axis, Fulani herdsmen have also unleashed considerable violence and some biased military commanders recently deployed armed operatives to invade Awgu community in Enugu State whereby 76 Igbo youth were arrested arbitrarily and dumped in Umuahia prison only because they resisted attempt to take over their ancestral farm lands by the Fulani herdsmen. The military operatives were deployed from the Enugu based Division of the Nigerian Army.

The extensive reach of the destructions unleashed by the Fulani herdsmen is unbelievably apocalyptic spanning all the six geopolitical entity of Nigeria.

In this piece therefore, we are inspired to ask the pertinent question of what the Fulani people have become between being described as terrorists as most other Nigerians have done or land grabbers.

A quick review of the latest book by the environmental and development consultant for a science magazine and columnist with the British Guardian Mr. Fred Pearce titled: “The land grabbers (the new fight over who owns the earth) provides better elucidation.

Again, a clearer elucidation of the Nigerian extant land administration law known as the Land Use Act of 1978 will give us a better clue as to why most observers think that there is a well coordinated plot by the Fulani to grab as much strange lands in distant places within Nigeria as much as they can especially now that Muhammadu Buhari a reputable Fulani cattle owner is in power as the president of Nigeria.

Recently, president Buhari got some governors to agree to establish ranches in their states as a way of resolving the widening specters of war between Fulani and other ethnic nationalities.

ALSO SEE: State of the nation: Our Fulani and herdsmen of mayhem?

Most Nigerians are however of the opinion that ranches should be established by States and not the Federal Government since the extant land use law gives ownerships of state lands to the people of the states to be in the custody of their governors. For the purpose of emphasis, let us review the preliminary chapter of the Land Use Act of 1978 which is the only constitutionally known land administration law of Nigeria.

Specifically, Land Use Act in chapter 202, laws of the Federation of Nigeria of 1990 provide thus; “An Act to Vest all Land compromised in the territory of each State (except land vested in the Federal government or its agencies) solely in the Governor of the State , who would hold such Land in trust for the people and would henceforth be responsible for allocation of land in all urban areas to individuals resident in the State and to organizations for residential, agriculture, commercial and other purposes while similar powers will with respect to non urban areas are conferred on Local Governments.(27th March 1978) Commencement.”

The law in part 1 generally states thus; “1. Subject to the provisions of this Act, all land comprised in the territory of each State in the Federation are hereby vested in the Governor of that State and such land shall be held in trust and administered for the use and common benefit of all Nigerians in accordance with the provisions of this Act. 2. (1) As from the commencement of this Act – (a) all land in urban areas shall be under the control and management of the Governor of each State. And (b) all other land shall, subject to this Act, be under the control and management of the Local Government, within the area of jurisdiction of which the land is situated; (2) There shall be established in each State a body to be known as “the Land Use and Allocation Committee” which shall have responsibility for…”

The states that are desirous to create ranches should therefore proceed to establish such schemes with the support of their State Houses of Assembly and Land allocation committees as stipulated by the extant Land Use Act.

Speaking globally about the hidden strategies of land grabbers, Mr. Fred Pearce noted in his book quoted aforementioned that the damage they unleash on indigenous communities are extensively unimaginable. He wrote thus;

“There is much uncertainty about how much land has been grabbed, and how firm the grasp of the grabbers is. In 2010, the World Bank came up with a figure of 47 million hectares. The Global Land Project, an international research network, hazarded 63 million hectares. The Land Deal Politics Initiative, another network of researchers that helped organize a conference on land-grabbing in the UK in mid-2011 estimated upto 80 million hectares. Within weeks, Oxfam, an aid agency, published its own estimate of 227 million hectares”.

The author further wrote thus: “the truth is nobody knows. There is no central register; there is little national transparency. Some of the largest deals I came across were done in secret and unknown even to the most diligent NGOs, while other deals have attracted headlines but have never come to fruition.”

The Nigerian Federal and State governments must make hay whilst the sun shines.
• Emmanuel Onwubiko is Head of Human rights Writers association of Nigeria and blogs @www.huriwa.blogspot.com, www.rightsassociationngr.com, www.huriwa.org.