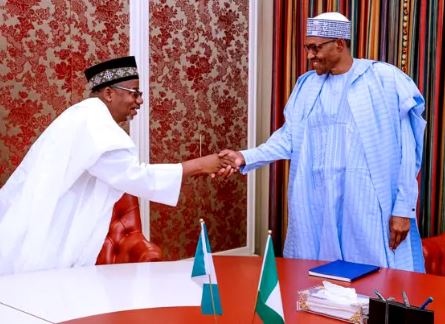 Governor Bala Mohammed of Bauchi State may be romancing with President Muhammadu Buhari as the build up to the 2023 general elections hits up the Nigerian polity. Governor Mohammed on Wednesday paid President Buhari visit at the Presidential Villa, Abuja, in the aftermath of the presidential inauguration of N23.5 billion World Bank Assisted Upgraded Bauchi Township Water Supply Scheme.

The commissioning of the project at the Gubi Water Treatment Plant in Bauchi, according to a statement in Abuja by the Special Adviser to the President, Media and Publicity, Femi Adesina, was performed on May 19, 2022, by the Secretary to the Government of the Federation, Boss Mustapha, representing the President.

Addressing the delegation led by the Governor, President Buhari thanked him for assembling a high-powered delegation for the visit and promised to look into requests by the State government to complete ongoing Federal Government projects in need of urgent attention.

The President commended Bauchi State for providing illustrious sons and daughters who are making invaluable contributions to his government and national development, singling out the Minister of Education, Adamu Adamu, for special mention.

‘‘He has been my close associate for a very long time and he is a son of Bauchi,’’ President Buhari told the delegation.

The Bauchi Governor said the State has ‘‘benefited so much’’ under the present administration, highlighting significant projects in the education sector, youth development, Industrial Training Fund, agro-processing, infrastructure and housing scheme.

The Governor declared that through the support of the Federal Government, Bauchi State received N12 billion to build 2,500 houses across the Emirates in the State.

‘‘This is the first time we have a housing scheme running across the emirates and I know our Royal Fathers here with me are most grateful to you and the Federal Government for this gesture,’’ he said.

Governor Mohammed told the President that despite party differences he is ‘‘loved and cherished’’ in the State because of his patriotism and insistence on prioritising the development of infrastructure in the country.

The Governor appealed to the Federal Government to construct the road from Alkaleri to Gombe-Abba because of oil exploration in the area as well as the dualisation of Jos-Bauchi-Gombe road.