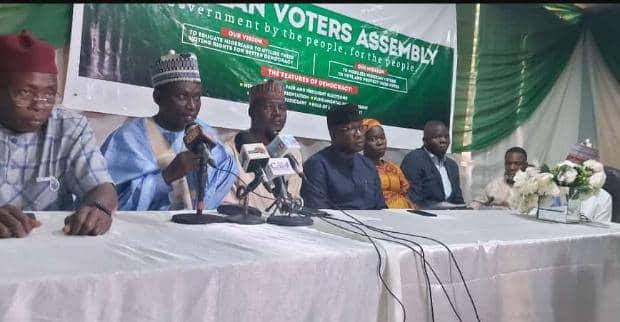 A socio-political movement, Nigeria Voters Assembly (NVA) has inaugurated various groups to embark on mass mobilisation and education of Nigerian voters to know more about their rights to enhance the nation’s democracy.

Dr Abdullahi Bello, the National Secretary of the assembly, disclosed this at a news conference on Monday in Abuja.

He said that the movement would mobilise all its members using the National and State structures to support any of the presidential candidates, irrespective of political parties that they are convinced can take Nigeria to the promised land.

“It is worthy to note that, in accordance with the relevant provisions of the Electoral Act, parties are the pillars of democracy and they reflect fundamental political divisions in our society.

“However, in many cases, it is not like that because most of the political parties are being run by one person like a personal business, no consultation with the caucus of the party.

“It is just a one-man affair and to us, we can’t allow ourselves to be used as stick in the hands of men for their personal profit,” the group scribe said.

According to him, most of the political parties have deviated from their fundamental principles and orientation into a cash and carry platform.

Bello stressed that the way and manner national officers and state chairmen of the political parties are treated, removed and replaced with impunity, sort of the owellian Animal Farm is pungently sad.

He emphasised that this attitude had aborted the vision, mission and indeed question the moral pedigree as well as the political goodwill of the parties.

“However, we are here to officially inaugurate Nigeria Voters Assembly. It is a political movement coalition of former presidential and gubernatorial candidates, national parties officials, state party chairmen and other influential people from different political parties.

“The aim is to mobilise and educate Nigerian voters to know more about their voting rights for better democracy.

“As a group, we will continue to mobilise ourselves by using our National and State structures,” Bello said.

Share this on WhatsApp
Related Topics:awarenessenhancegroupinauguratesmobilisationVoters Assembly
Up Next