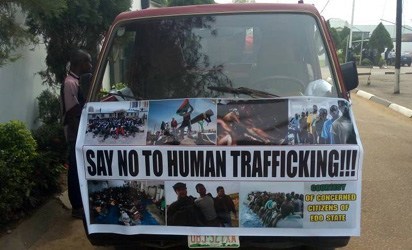 Sanwo made the call during a sensitisation awareness campaign and road walk organised by A-TIPSOM in collaboration with National Agency for the Prohibition of Trafficking in Persons(NAPTIP) in Awka on Thursday.

He said that the project was aimed at preventing the menace of traffickers before seeking how to save the victims when the deed is done to innocent unsuspecting members of the public.

“You know that prevention is better than cure, so this is a serious business, we have to take awareness of the menace to the public with the aim to curb it.

“When you expose dangers to targeted audience and teach them how to detect and handle such issues they will be well informed on how to handle the challenge anytime it shows up.

“But if they are unaware of the antics of the traffickers they will fall victims and lives may be lost in the process or wrong way of living may be seen as right, thereby social degeneration becomes order of the day,” he said.

Sanwo said government had a huge need to checkmate the activities of these unpatriotic persons before the youths of the country are made to be a total waste and a generation of no hope.

He called on Anambra Government to intensify efforts to fight the menace of trafficking in persons and smuggling of immigrant as their activities may jeopardise the economic and social development of the state.

Sanwo said that (A-TIPSOM) is a project funded by European Union and implemented by the international and Ibero-American Foundation for Administration and Public polices (FIIAPP) with NAPTIP.

Mrs Judith Chukwu, Commander Anambra, NAPTIP, said the sensitisation and road walk were aimed at telling the public on the dangers of human traffickers and ensure it is kicked out of the state.

Chukwu said that the exercise was also to fulfill the NAPTIP mode of operation of notifying the public on its workings to fight human traffickers and be aware of their antics.

She said that NAPTIP had planned to take the walk and sensitisation process to all the rural areas as a provide the mechanism to reject the offers of these traffickers and make the public know that human trafficking is real .

“Anambra NAPTIP is battle ready to deal with human trafficking and smuggling of immigrants in the state but we solicit the cooperation of the public.

“We are sensitising the public both at the urban and rural centres on how to detect these unpatriotic citizens so as to achieve a goal of kicking the traffickers out of the state,” she said.

Mrs Ijeoma Nnaji , the South East Zonal Coordinator for Network Against Child trafficking, Abuse and Labour, NACTAL, said that they were out to wage war against those that confuse the youth and lead them into anti-social behaviours.

She said that the government had done well by setting up government agencies in tracing these bad attitudes, appealing to government to take ownership of the activities of NACTAL

“The fight against human traffickers are for all mothers, fathers, uncle aunties ,let us all join hands to fight these miscreants behaviours going on now, lets say know to rapists and abusers” she said

Mrs Euchaira Onyemaobi, NACTAL Anambra Coordinator, said that the increase of human traffickers was alarming in the state and that it calls for worry which informed the need to take the information from door to door.

Onyemaobi said that trafficking of children in the state appeared to be a normal business and that is what the NACTAL and other sister bodies were fighting against.

Mrs Chioma Beluchukwu, a resident commended the bodies for the noble work and urged them to penalise any defaulter as the rate of these abuses was unimaginable.

“I pray that this exercise will touch the hearts of some parents who look aside for their children to engage in unholy labours to bring money for them.

Share this on WhatsApp
Related Topics:concerted effortsendgrouphuman trafficking
Up Next