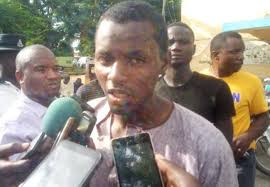 A Fulani herdsman hugging his AK-47 and a pistol was arrested by police in Bauchi Wednesday.

Sadiq Mohammed admitted to using the weapons without a licence as he spoke to reporters while being paraded at the Police Headquarters in Bauchi.

The herder’s statement is in contradiction of President Muhammadu Buhari’s insistence: that Fulani herdsmen don’t bear weapons—only bandits and migrant herdsmen from Niger do.

“I have had these guns for 11 years. I have got them since I was in Plateau State. The man who first bought this gun is dead. He was killed, so I took it,” said Mohammed.

“I have never killed any person with these guns but I’ve been using them to protect myself and my cows from people who may want to attack me and steal my animals.

“Any time I take my cows to Plateau State, I use the guns to protect myself while moving with them.”

According to him, he and his colleagues were losing their cows to rustlers so he opted for guns to protect himself and his herd.

Mohammed said there had been occasions when he was forced to use the guns to ward off cattle thieves.

“I opened fire on them to scare them away, and when they ran away, and I also escaped with my cows.”

He admitted he was not licensed to own a gun, but added the real owner was killed while they some years ago, so he took the gun (AK-47 rifle) and it became his

“So long as I am with my cows, I don’t put my gun away, I am always with it even if I am sleeping. I keep it beside me. I hold it in broad daylight boldly like the police hold their rifles when I am with the cows and nobody has ever stopped me.”