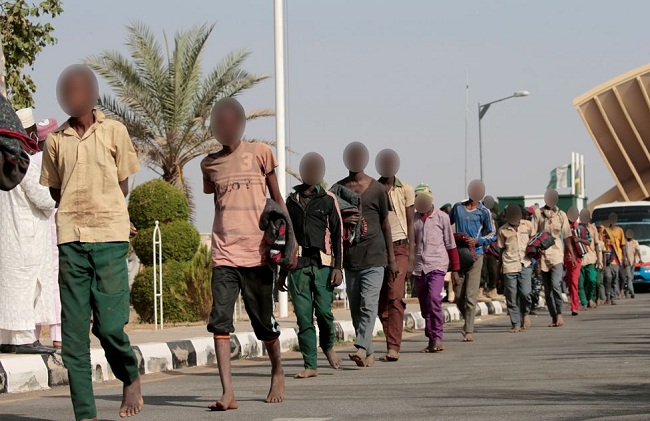 The International Criminal Court (ICC) in the Hague is making a move for the investigation of the Nigerian government on the kidnapping of school children by the Boko Haram theorists in the northeast and bandits in the northwest.

An advocacy group, Socio-Economic Rights and Accountability Project (SERAP), in a statement on Sunday indicated that the prosecutor of the International Criminal Court (ICC) is, therefore, seeking authorisation from the Pre-Trial Chamber of the ICC to open an investigation into cases of kidnapping of school children in several parts of Northern Nigeria.

The ICC seeks to further investigate the shutdown of schools, and the “persistent failure of Nigerian authorities” at both the federal and state levels to end the abduction.

The Deputy Director of Socio-Economic Rights and Accountability Project (SERAP) , Kolawole Oluwadare, in the statement revealed that the ICC prosecutor’s decision followed a petition sent to the court by SERAP.

SERAP had in the petition dated 4 September 2021 urged the ICC prosecutor, Mr Karim A. A. Khan, QC, to “push for those suspected to be responsible and complicit in the commission of these serious crimes, to be invited and tried by the ICC.”

In the petition, SERAP argued that “The severe and lifelong harms that result from depriving children the right to education satisfy the gravity of harm threshold under the Rome Statute.”

Responding, the ICC prosecutor in a letter with reference number OTP-CR-363/21, and dated 22 October 2021 confirmed to SERAP that “the criteria for opening an investigation into a string of abductions and closure of schools in some parts of Nigeria have been met.”

The letter signed on the prosecutor’s behalf by Mark P. Dillon, Head of the Information and Evidence Unit, read in part: “On behalf of the Prosecutor, I thank you for your communication received on 13/09/2021, as well as any subsequent related information.

“The preliminary examination of the petition is considered complete. Under Article 53 of the Rome Statute, the next step in the judicial process is for the Prosecutor’s Office to prepare and submit a request to the Pre-Trial Chamber for authorisation to open an investigation on Nigeria.

“Once submitted, the request will be made publicly available on the Court’s website: www.icccpi.int.

“Your communication will be forwarded to the relevant team to be analysed, together with other related communications and other available information, in the context of any future investigations. We thank you for your interest in the ICC.”

SERAP deputy director, Kolawole Oluwadare, said: “By this decision, the ICC prosecutor has taken a significant step toward ensuring that those suspected to be responsible for grave crimes against Nigerian schoolchildren are exposed, and held to account.

“The victims of these crimes deserve justice. Impartial justice and reparation will deal a decisive blow to impunity of perpetrators, and improve access of Nigerian children to education. SERAP will work closely with the ICC to achieve these important objectives.”

SERAP’s petition to the ICC prosecutor, read in part: “Senior government officials know well or ought to know that their failure to prevent these crimes will violate the children’s human rights and dignity.

“The consequences of persistent abductions of students, closure of schools, and the failure to provide safe and enabling learning environments despite federal and state authorities yearly budgeting some N241.2 billion of public funds as “security votes”, are similar to those of the offences in article 7(1).

“More than 10,000 schools have been reportedly closed in at least seven northern states over the fear of attack and abduction of pupils and members of staff. The states are Sokoto, Zamfara, Kaduna, Kano, Katsina, Niger and Yobe.

“Among the string of abductions in Zamfara was the abduction of over 200 schoolgirls in the town of Jangebe in February. The latest abduction comes after widespread reports of abduction of students and closure of schools in many states of Nigeria, including in north-central Niger State where some 91 schoolchildren were abducted.

“Families and parents have reportedly resulted to paying the terrorists thousands of dollars as ransom to secure the release of their children. An estimated $18.34 million was reportedly paid in ransoms between June 2011 and the end of March 2020.

“Nigerian authorities have also failed and/or neglected to satisfactorily address the abduction of 276 schoolgirls from Chibok in 2014, which prompted the #BringBackOurGirls campaign. According to reports, more than 100 of those girls are still missing.”

Nigeria is a state party to the Rome Statute and deposited its instrument of ratification on 27 September 2001, thus giving the court jurisdiction over crimes of genocide, crimes against humanity, and war crimes committed on its territory or by its nationals.

The ICC prosecutor decided to seek an investigation after undertaking a preliminary examination of the cases of abduction of children in the country.

A three-member panel of ICC pre-trial judges will consider whether to grant the prosecutor’s request, once it is submitted, to let the ICC step in as a court of last resort.

Judges will rely on the materials submitted by the prosecution to determine whether there is a “reasonable basis” to proceed. Victims and their families may also make their views known to the pre-trial chamber.

If the investigation identifies suspected perpetrators of the crimes alleged in SERAP’s petition, prosecutors can ask judges to issue international arrest warrants, which can remain under seal to help authorities apprehend those charged.

As an international court of last resort, the ICC is mandated to bring to justice people suspected to be responsible for war crimes, crimes against humanity, and genocide when national courts are unable or unwilling to do so.