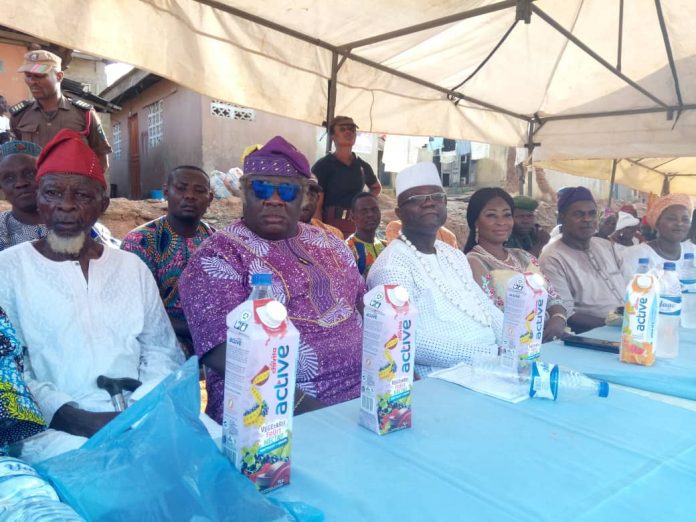 Share this on WhatsApp
Spread the love
By Lanre Adesanya

The Lagos State Theartre Arts Association has pledge their unflinching support for High Chief Owolabi Salis’ gubernatorial aspiration, describing him as a well traveled and exposed personality with the needed competence to emancipate Lagos and Lagosians from the
tight grip of poverty and lack.
Speaking at a Star Alliance of Lagos Theatre Arts Conference, the conference chairman Hon. Faniyi Omololu  cited the wealth of
experience and exposure possessed by Salis as the major attraction that endears the group to him, given the fact that many people targeted beneficial developments will be facilitated by him.
“We know him, we know his capacity and what he can do, he has traveled up and down almost every country in the world, so we know what he can do, and what he has been doing.

“That is why I came here to endorse him as the next governor of Lagos State by God’s grace.
Salis who was the guest lecturer at the conference spoke extensively on living standards of the commoners in Lagos State, citing leeway available to restore sanity.
My lecture harps on the living standards of the commoners in Lagos and I have really dealt with it terms of their basic needs because the
government needs to address the basic needs of this less privileged people, the commoners, grassroots people.
” Now I tried to look into the health situation because there is so much widening gap on health matters in Lagos, a lot of rich people are okay but poor people buy antibiotics to address some of the problems they are facing.
“Look at housing, for the past 20 years there has been no housing for less privileged people and rich are the only one living in comfort, there are a lot of commoners living under the bridges, we are going to address that if we win this election.
“Then we talk about food a lot of people are hungry because the economic situation is so bad, the grassroots people that most of them
have no.
“Jobs and there is a systemic slavery going on trying to use our people for violence while they take own children abroad and take good care of them, but the children of the less privileged people are being empowered into violence.
“Give them guns and cudgels, these guys are killing themselves, so we have to address this social malaise for them to live and have good
life.
Salis the AD gubernatorial candidate also comment on why this endorsement is important.
“Theatre Art practitioners endorsement is  important because they are the face of the people, they are the less privilege ambassadors, because a lot of people love them, the artiste and the musicians they command the people, so it can really have an effect on this election.
“I lived in Newyork for over 20 years ,I know the theatre practitioners in Nigeria are the best in the world. The Nollywood because they act practical movies and I know that a lot of nationalities in America watch the movie for their health.
“Even myself sometimes when I put the movie in ten minutes you just get hooked up hours you be on it in order to pass time.
“So I know, the Carribeans and other nationalities watch it too,what you gonna do is to put them into limelight so that when they have movie releases you can connect them with sonic pictures and other major theatre owners in America for better economic turn over.
The kind gestures of Salis in time past was however, lauded by His Royal Majesty Oba Abdul-Semiu Orimadegun Kasali the Emugoriade 1Adeboruwa of Igbogbo Kingdom.
The Igbogbo monarch hinted that Salis influence in his kingdom is great as he touched all facets of live,he made the disclosure at the 30th Igbogbo Day anniversary celebration commemorates with an exclusive dinner with the king.
“High Chief Owolabi Salis is undoubtedly an illustrious son of Igbogbo and we can attest to that fact, he has no doubt made us proud and we wish him well in his aspiration.
Share this on WhatsApp