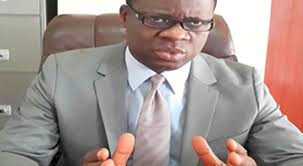 Igini was among a select team sponsored by the United States through the International Republican Institute (IRI) and the National Democratic Institute (NDI) to conduct a pre-election observation mission in Ghana a fortnight ago.

The team was on the assignment of holding meeting with relevant stakeholders in Ghana, assess the country’s levels and extent of preparations for the coming General Elections.

The select team that conducted the preparatory assessment of the General Elections in Ghana was comprised of distinguished persons who included the United States Assistant Secretary of State for African Affairs, Ambassador Johnnie Carson, IRI’s Country Director for Tanzania, Robina Namusisi,  who was former Country Director for Nigeria; Chris Fomunyoh, NDI’s Regional Director for Africa; former Minister of Education and former Vice-President for the World Bank, Dr. Oby Ezekwesili. Also included in the team was Gabrille Bardall who is a renowned academic and an electoral assistance expert.

The visit of the team to Ghana signified a remarkable rise in momentum in the build up to Ghana’s coming General Election. The country has conducted several successful democratic elections in the past two decades, with transitional elections in which parties have successfully handed over power while maintaining political stability. Such preparatory assessments helps to evaluate the necessary steps that stakeholders are taking to sustain the democratic culture in the country as well as in the West African region.

Sentell F. Barnes, Resident Country Director, Nigeria International Republican Institute, had in a letter to Igini after a telephone conversation, explained that were looking for someone with a background and experience in conducting elections.

“…The United States through IRI and NDI are conducting a pre-election observation mission in Ghana. This event requires the team to meet with relevant stakeholders in Ghana to assess the progress of preparations, logistics and the overall environment for Ghana’s upcoming national elections. You have been recommended very highly. I hope that you will be able to participate as we are looking for someone with a background and experience in conducting elections,” Sentell declared inter alia.

The team arrived in Ghana on Sunday, August 7; while Meetings were conducted throughout the week with the election commission, civil society organizations, political parties and other election stakeholders. Departure schedule was Friday, August 12, 2016.

IRI covered all travel related expenses (airfare, transfers and hotels) and provided food during the week.