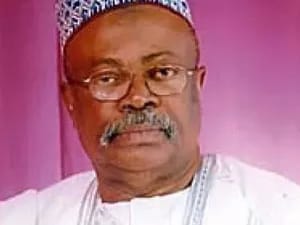 Former Lagos state commissioner of police and federal Commissioner of Public Complaints Commission, Alhaji Abubakar Tsav has declared that he was ready to face his state governor, Chief Samuel Ortom in court.

Tsav stated this while responding to questions on the purported suit the state governor was said to have filed against him for alleged defamation of character.

Media Adviser, o the state governor, Tahav Argezua had issued a release that the governor through his counsel, Professor Tony Ijohor (SAN) had threatened N1billion suit against the public crusader over campaign of calumny against him unless he tendered unreserved apology in some dailies within seven days.

Tahav further said in his statement that one Abraham Kwanghngu had filed a suit of N200m at Makurdi high court.

The former commissioner of police of Lagos State explained that he was yet to be served with any of the suits allegedly slammed on him by governor Ortom and one Abraham Kwanghngu but said that he was anxiously waiting for the court case where he pledged to shock the governor with series of his undoings before and now that he became governor.

Tsav further said that no amount of intimidation by the governor or his agents would silence him just as he submitted, ‘I will not stop from criticizing the desperate Ortom and his cohort, as far as he is playing puppet kind of leadership with Benue.