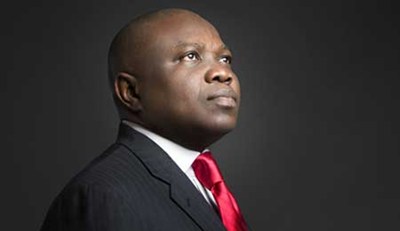 Share this on WhatsApp
Spread the love
The Academic Staff Union of Universities (ASUU), Lagos State University (LASU) chapter, has urged Gov. Akin‎wunmi Ambode of Lagos State to implement a single-term of five years for principal officers of the university.
Dr. Adekunle Idris, ASUU-LASU Chairman, told the News Agency of Nigeria (NAN) on Tuesday in Lagos.
Idris said the union was in support of the executive bill before the Lagos State House of Assembly to amend the LASU 2004 Law to incorporate a single-term of five years for the office of the Vice-Chancellor and other principal officers.
“We advise that the University Miscellaneous Provision Act, a Federal law for the effective administration of Universities in Nigeria should be adopted by Lagos State and should not be balkanised.
“The A‎ct stipulates a one-term of five years for all principal officers and not just for the vice-|chancellor while it gives more powers to the university’s governing council.
“Also, the governor should approve the provisions that stipulate 70 years and 65 years as the retirement ages for Academic Staff in professorial cadre and Non-academics respectively,’’ he said.
Idris urged the government to fast track the implementation of the bill before the engagement of a new vice-chancellor.
He said that, “The union will not condole the employment of a V-C with a four-year –renewable-term agreement.”
The chairman also urged the state government to resolve all the core outstanding issues that were germane to the current crisis in the institution before the emergence of the new V-C.
“We suggest that the core outstanding issues be resolved so that the incoming V-C can start work on a clean slate with the staff unions.’’
He listed them to include: unpaid salary increase arrears outstanding since 2010, replacement of damaged union buses and vehicles belonging to the Senior Staff Association of Nigeria Universities (SSANU).
Also, that ‎of the Non-academic Staff Union of Universities (NASU), LASU chapter,’’ he said.
He said, “Our union owes it as duty to press for the rights of our members; and the resolution of core ‎outstanding matters.
“It will be most distracting to the incoming V-C, whoever it may be, to start off his or her tenure with crisis,” he said.
Idris said the union should not be held responsible for the inaction of the governing council or the university administration during the transition period.
He, however, urged the Governing Council to look into the cases of outstanding promotions of the staff members and reports of the investigation of inappropriate promotions and appointment cases submitted by the union.
“We are convinced that the urgent resolution of these core ‎issues will pave the way for a smooth transition and sustainable industrial peace and harmony in the university,” he said.
Idris appealed to the Governing Council and the Visitor to the university to select the best applicant for the post of V-C.
“We encourage the Governing Council and the Visitor to select the best applicant for the V-C, who must be a scholar with a good knowledge of the workings of the ‎university.
“Also, he or she must be someone with a high emotional intelligence and fear of God ‎, as LASU deserves some peace and progress,’’ he said.