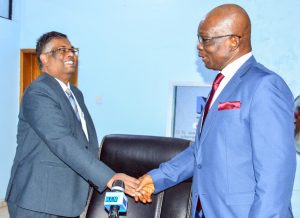 Indian High Commissioner to Nigeria, Shri Balasubramanian, on Wednesday said the country would offer 500 scholarships to Nigerians in 2023.

Balasubramanian, during a courtesy visit to the News Agency of Nigeria (NAN) in Abuja, said that his working visit to the agency was to promote information and communication exchange between the two countries.

Balasubramanian said, “We will be having a group of Journalists from Nigeria go to India, not on a course but” actually a field visit being organized to expose India.

“In other words, what India has been doing in the area of politics. We will not be doing it exclusively for Nigeria, but for  West Africa, for about 30 people.

“I am sure that Nigeria, being a part of G20, will be able to get more numbers, so we will be doing it after March and April.

“I will discuss it with you to get your recommendations also; we do award 500 scholarships every year to Nigerians, 250 of them are  on the civilian side.

“We will be happy to reintroduce the further studies in the area of Mass Communication in a prestigious place and we have short term courses also.”

He mentioned that the scholarship involved other courses that Journalists could be interested in, saying “we work on a calendar basis and our financial year comes to close in March”.

“So, April to March is our calendar through which we do all these things.

“Currently, it is two and a half month that is available, but come April it will be the first 250 and we will be happy to continue these things,” the envoy added.

He commended bilateral relations between the two countries to have been excellent and that more would be done to further deepen India-Nigeria ties in healthcare delivery.

He said that Nigeria’s invitation as a guest participant to the G20 Summit scheduled to hold from Sept. 9 to 10 in New Delhi in India, would boost the opportunity to showcase the priority of developing countries to the world.

The High Commissioner listed the mission’s plan for 2023 to include celebration of India National Day on Jan. 26, Food Festival and Cooking Competition on Jan. 28 and facilitation of “Yoga” weekly-exercise to boost healthy living.

The Managing Director of NAN, Buki Ponle, commended Balasubramanian for the visit to have been apt in deepening relations on information sharing and news network between the two countries.

According to him, the relationship between the mission and the agency started on a very nice note and that a lot would be done to explore other spheres to produce best results for both countries.

Ponle said, “We are friendly, we accommodate and we want to be friends forever for mutual benefit; it extends to us in NAN to see outsiders as part of us.

“NAN and India share common goal right from inception, the agency was established by an Act in 1976 and we started operation in 1978 and incidentally I was a pioneer member of staff.

“We also had a partnership with the Press Trust of India, we were always going to India for further studies in Mass Communication, but there was a stage when the agreement was no longer in vogue.

“With renewed relationship we hope the partnership will be revived; we will offer everything to make your stay highly rewarding in areas of coverage, enhanced visibility and exposure.

“We are always at your service and that also translates to making ourselves available for your country’s activities in Nigeria and over there in India.”

He reiterated that such practice would be informed by news and cultural exchange through information and communication sharing, as well as other areas that would be beneficial to both countries.

The managing director assured Balasubramanian of adequate support by the agency in coverage of the forthcoming G20 Summit.

The agency boss also appealed for facilitation of the exchange programme between the NAN and news agency in India through signing of agreement to ensure seamless flow of information and communication on a daily basis.

He mentioned that two agreements were signed with the Bulgarian News Agency, as well as Turkey in addition to news exchange programmes in line with Reuters, AFP and China News Agency.

He, however, said that the agency sought to establish such a partnership with India too.

The high point of the visit was a group photograph between Balasubramanian and the NAN management.