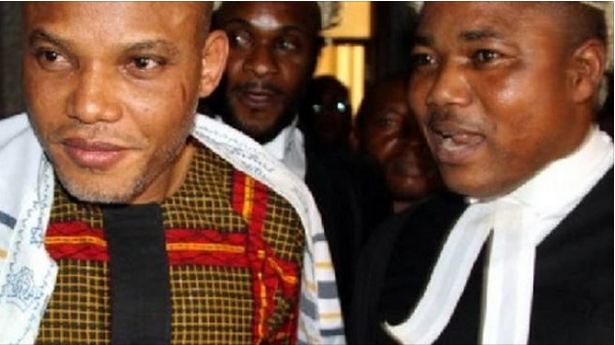 Confusion deepening in IPOB has created a rift among members of the outlawed group, and some are waging war already against their leader Nnamdi Kanu’s lawyer

Lawyer Ifeanyi Ejiofor lamed ‘marauders in IPOB’ for the crisis that greeted the counter-orders flying around the sit-at-home protest the group seeks to enforce across the southeast.

Some want the order to be enforced while Kanu’s family said no. And the secessionist leader himself cancelled it eventually—from his DSS detention, through Ejiofor.

A section of IPOB however believe it was all Ejiofor’s handiwork, since he’s the only one that has access to Kanu.

They are now accusing him of sabotage.

But in a statement, IPOB’s spokesman Emma Powerful warned those attacking Ejiofor to be reasonable.

“Some uninformed fellows and mischief makers have been insulting, criticizing and attacking Ifeanyi Ejiofor for giving his nod to the suspension of the Monday weekly sit-at-home,” he said.

“IPOB is also disappointed that despite our earlier explanations on the rationale behind our decision to suspend the Monday sit-At-home order, some fellows are still disparaging our lead counsel and our leadership over the decisions.

“We therefore, wish to advise all those playing the devil’s advocate to desist in their own interest and stop giving our enemies room to mock us.”