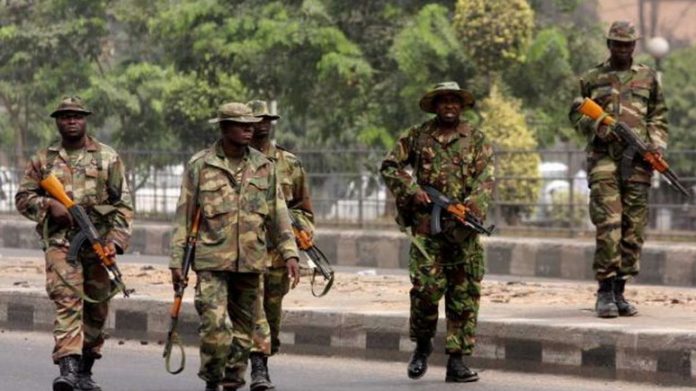 The Joint Military Task Force (JTF) in the Niger Delta has denied an online report that the military invaded Letugbene area in Bayelsa state in a reprisal attack over the killing of soldiers.

It would be recall that an online report had alleged that the military attacked the community, burning houses and intimidating people over the killing of some soldiers by yet to be ascertained gunmen.

But in statement, spokesman of the joint force code-named Operation Delta Safe (OPDS), Olukoya, denied the report, but confirmed the death of no fewer than 4 soldiers in an ambush by unknown gunmen at the Letugbene area in Bayelsa state.

Olukoya said that the ambush by unknown gunmen which claimed the lives of four soldiers happened on February 16.

He said; “Troops while carrying out their routine duty within its area of responsibility on Feb. 16, at about 6 p.m. were ambushed by unknown gunmen.

“Four soldiers were killed in action. However, investigation is ongoing to ascertain the persons or groups behind the attack,” he said.

Olukoya debunked an online media report that the soldiers invaded the community in a reprisal attack, describing the report as false and unfounded.

“It is important to state here that contrary to an online report, the men of OPDS did not invade Ekeremor community at any time,” he explained.

Olukoya reiterated that the mandate of OPDS was to protect oil facilities, deter militancy and oil theft.