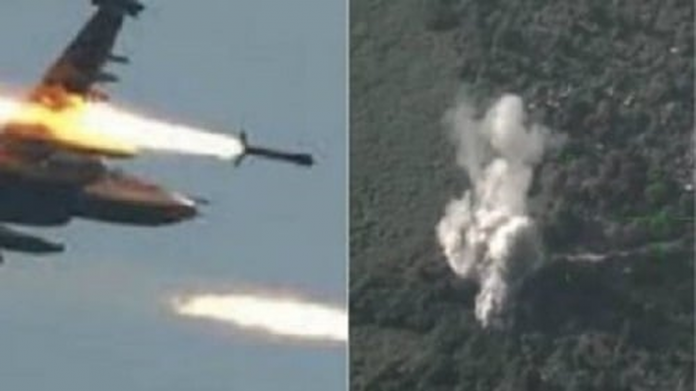 The Kaduna government besieged with banditry seems done with concerns for collateral damage as it authorizes an armed air reconnaissance by Operation Thunder Strike over the local government areas and highways crawling with kidnappers—and their captives.

About a week ago, Gov Nasir El-Rufai told Nigerians the government was about to allow the military bomb the kidnappers hideout in the forests where they are holding their victims—students of the Mechanised Forestry Institutes and Greenfield University, and pockets of others.

But the mediation by Sheikh Abu Gumi and ex-President Olusegun Obasanjo saved the day, and the forestry students regained their freedom.

Up till now, over a dozen of the varsity students remain in captivity because the kidnappers have upped the ante: from N60m to N100m in ransom.

The students may not be lucky this time.  The air component of the Operation Thunder Strike have begun shelling.

Erena, Kusasu, Kuduru, Kulefe, Kusherki and Shiroro in neighbouring Niger State as well as Chikun and its environs in Chikun Local Government Area have come under bombing since May 14.

Scores of the bandits have been killed and their hideouts incinerated in Birnin-Gwari and other places.

According to Commissioner for Internal Security and Home Affairs, Samuel Aruwan, the bandits were seen fleeing Kaduna State part of Kusasu in Chikun LGA on motorcycles.

“They were trailed by the crew and subsequently neutralized,’ he said at a briefing Friday.

Aruwan did not say specifically what has happened to kidnap victims held in those camps the aircraft struck.

He however noted normal human activities and free flow of traffic were observed along the highway and rail line, and locations scanned were reported calm with no threats observed.

“Additionally, strike aircraft carried out operations over Jan Birni, Birnin Gwari Local Government Area, which was observed to be active with bandits.

“The targets were attacked by the aircraft and it was subsequently confirmed that some bandits were indeed taken out and the camp set ablaze and destroyed.

“A second mission was flown over another identified camp in the area, which was also attacked, set ablaze and completely destroyed by two strike aircraft, he said.

But the fusillade is not the only military option the government said will be sustained in Kaduna for days ahead.

There have been shows of force, too, carried out by the aircraft over the Birnin Gwari general area, Kaduna metropolis and Zaria and over a dozen other areas.

“These air operations, which include air interdiction, armed reconnaissance and patrols, are set to be sustained over the coming days over Kaduna metropolis and other areas of interest in the state,” the commissioner said.

“Major highways will also be covered, including the Kaduna-Birnin Gwari, Kaduna-Abuja, Kaduna-Zaria, Kaduna-Kachia and Kaduna-Afaka roads.

So far, Governor El-Rufai has commended the crews for the successful missions and thanked them for their proactive operations.