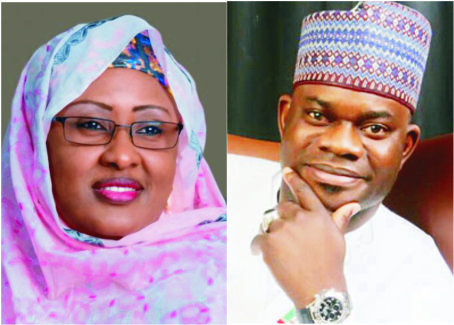 THE decision by the leadership of the All Progressives Congress, APC to forward the name of Alhaji Yahaya Bello as replacement for Prince Abubakar Audu in the December 5, 2015 supplementary election may have been influenced by Mrs Aisha Buhari, wife of President Muhammadu Buhari.
Investigations by the National Daily in Abuja, the Federal Capital and Lokoja, the Kogi State capital revealed that Bello got the ticket because of alleged influence of the President’s wife in the political imbroglio that resulted following the mysterious death of Prince Audu soon after the Independent National Electoral Commission, INEC announced last week’s governorship election inclusive.
It was gathered that Mrs Buhari also prevailed on Attorney General, ‎AGF Abubakar Malami (SAN), Secretary to the Government of the Federation (SGF) Babachir Lawan and APC National Chairman, John Odigie Oyegun to accept in a move expected to see her play more strategic role in the days ahead.
Bello’s choice and endorsement as replacement for the late Prince Audu c‎ame as a surprise as it was done against earlier directive from the AGF and INEC that the APC should conduct fresh primaries to determine the flagbearer in the December 5 election.
But the APC justified that Bello was adopted because he came second in the primaries won by the late Audu and that any other person chosen would be thrown out by the courts once the decision was challenged.
However, some youths weekend blocked the major Ayangba-Abuja Highway to protest the alleged emergence of Bello, as the party’s replacement for late Prince Abubakar Audu as the governorship candidate of the party in the inconclusive election in Kogi State.
Their grouse was that Bello left the APC for the Peoples Democratic Party after he was defeated in the party’s primaries by Audu, who was coasting home to victory in the election declared inconclusive by INEC.
Bello campaigned for the candidate of the PDP and incumbent, Governor Idris Wada, in the rundown to the election.
The protesting youths blocked the Ayangba-Abuja Highway as Itobe to show their disagreement with the choice of Bello.
But the leadership of the Abubakar Audu/James Faleke Campaign Organisation said on Saturday that the only way not to plunge the state into crisis was to nominate Faleke to carry on where Audu stopped.
It said the National Chairman of the party, Chief John Odigie-Oyegun, was only acting his selfish plot by doing otherwise.
The position of the Campaign was made known by its Head of Media, Dr. Tom Ohikere, in an interview.
Similarly, APC Lawmakers from Kogi State on Friday threatened to impeach any candidate chosen to replace the late flag bearer, Prince Abubakar Audu.
Some of the lawmakers, who were at the party’s secretariat in Abuja, told newsmen that their wish was that Mohammed Audu be given the mandate of his late father.
Momoh Rabiu, who spoke on behalf of the lawmakers, said: “Based on our discussion, we have taken a decision and taken our resolution to the national chairman.
“We are overwhelmed by the response from them, but we are still waiting for a safe landing so that Kogi will not be doomed.
“We told the national chairman that on no account should anybody be smuggled in to occupy that position, which we worked for in conjunction with the late Audu, without who there would be no APC in Kogi State today.
“We presented to the national leadership Prince Mohammed Audu to replace his late father.
“It is not because he is the first son, but try him, he is very intelligent and equal to the task.
“With him, we will have the Kogi of our dream.”
Rabiu said the decision to replace the late Audu with his son was taken because of the commitment of the late flag-bearer and because the lawmakers do not want Kogi State to continue to be ruled by the Peoples Democratic Party.
Insisting that their threat to remove any candidate that emerged from the proposed primary was no threat but a fact, Rabiu appealed to the APC leadership to respect their wish.
He said: “We are the legislators and have told the national chairman our position that in any case anybody emerges contrary to what we present to them, we know the best way to remove him.
“It is not a threat, but we told them that we have no intention of washing our dirty linen in public.
“Removing somebody is just a two minutes job for us as lawmakers in the state.
“We want the change we worked for and we want Kogi to be part of the moving train.
“We are not asking Faleke to stay away from the ticket.
“We equally worked with him during the campaigns.
“What we are saying is that it should be Mohammed Audu/Faleke ticket.
“The two of them must work together.”
The News Agency of Nigeria recalls that since the death of the late leader on November 22, there had been speculations about who would emerge from the party.
Although the leadership of the party had been having series of meetings to deliberate on the issue, it is yet to reach decision on the date of a fresh primary in the state.