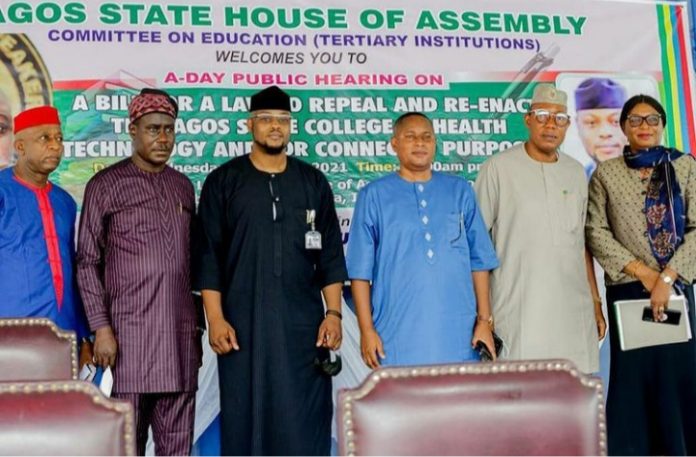 The Lagos State House of Assembly has taken a proactive step to bolster up human capital development within the health sector, to cater for unforeseen health challenges with the amendment of a bill.

The bill is entitled; ‘A Law To Repeal And Re-enact The Lagos State College of Health Technology And For Connected Purposes.’

The bill which has 54 sections, went through public hearing at the Assembly premises on Wednesday June 3, it will further provide better training for workers in the health sector.

The Deputy Speaker of the House, Hon. Wasiu Eshilokun-Sanni, who represented the Speaker, Rt. Hon. Mudashiru Obasa, stated that the esssnce of the amendment is to make the  bill more functional and in tandem with the need of the people.

‘Of recent we have ebola, now we have COVID-19, we need to have the needed manpower.

‘In the olden days, they provided the manpower that can man the health facilities across the nation.

‘Nowadays there is need for us to revisit that. The bill is more thorough and defines the functions of the council, members of the academic board, students welfare and who to approve the various schools. Everything is well stated an  in tune with modern reality,’ he said.

Also speaking, the Chairman of the House Committee on Education (tertiary), Hon. Ajani Owolabi stated that the institution has various  categories of qualifications and various courses have been approved for them.

Owolabi said that the bill tries to expand the kind of knowledge to be given to the students .

He added that there are clauses in the law that ensures that the funding of the institution is taken care of.

‘We all know that healthcare is an expensive venture so we need to put everything in place for that.

‘The machineries for the training can be expensive. The school has a provision for that to make it possible for the school to purchase equipment,’ he said.

She however commended the Assembly for coming up with the amendment of the bill that established the institution in 1920.

A stakeholder at the event, observed that there is no provision for medical centre in the college and that the statutory retirement age for the staff should be 65 and that non-academic staff could retire at 60.

He also observed that the Lagos State University College of Medicine (LASUCOM) is the apex Healthcare training institution in the state and that such should not be ascribed to the college.

According to him, this would prevent rivalry between the institutions and foster unity among them.

The Provost of LASUCOM, who was also at the event, Professor Abiodun Adewuya advised that the issue of disciplining of the student should be part of the jobs of the academic board.

Another stakeholder, Dr. Mustapha Daud from Havana Specialist Hospital stated that no institution could do it alone and that the students should be made to go through Industrial Attachments in other healthcare facilities.

Earlier, the Leader of the House, Hon. Sanai Agunbiade, who did the overview of the bill said that it would take care of all the grey areas in the law that established the college.