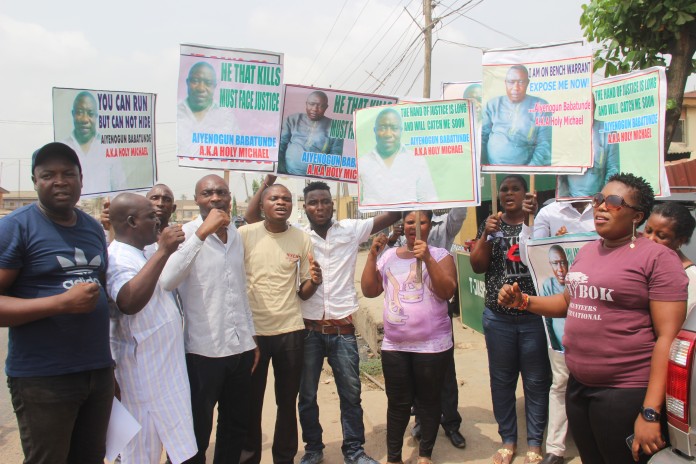 The Concerned Human Rights Nigeria has urged Lagos State commissioner of police, Fatai Owoseni to urgently latch on the existing bench warrant issued on a leader of Tricycles Owners and Drivers Association (TODA), Babatunde Aiyenogun and effect his arrest having alleged to have masterminded the killing of one Ademola Yusuf over class struggle.

Speaking on behalf of the deceased,the National Co-ordinator of the group, Comrade Declan Ihekaire during a press briefing at Funmilayo Bus-Stop, Agege, said the alleged culprit must not be allowed to evade justice.

On some of the placards wielded by the group were inscriptions like: “The hand of justice is long and will catch me soon, Babatunde Aiyenogun,” “He that kills must face justice,” “You are on bench warrant since October 13, 2015,” I am on bench warrant expose me now!” “You can run but cannot hide,” among others.

In a release made available to newsmen and signed by the Co-ordinator, Ihekaire disclosed that Aiyenogun who had earlier been released at the criminal investigation department, Panti, Yaba had refused to appear before a High Court that issued a bench warrant on him.

A copy of the bench warrant dated 15th October, 2016 titled “Re: Execution of Bench Warrant in the people of Lagos vs Babatunde Aiyenogun” was duly  attached .

According to Ihekaire crisis broke out within members of The Tricycle Operators Association of Nigeria (TROAN) and Aiyenogun with affiliation to the Trade Union Congress (TUC)  formed his own association, Tricycles Owners and Drivers Association (TODA) and fell out with other group which later led to gruesome murder of Yusuf who belonged to TROAN.

The statement read in part, “On the 4th of June 2014 about noon at the boundary area of Ajegunle in Ajeromi local government, Lagos State. One Ademola Yusuf was stabbed to death for no just cause. His death was linked to one Aiyenogun Babatunde- a.k.a. Holy Michael.

“However, evidences available to us show that the suspect was released by the police and could not be produced again to face the murder charge against him based on a DPP advice indicting him. The non-appearance of the suspect in court had led to the issuance of bench warrant dated October 13, 2015 by Justice Adedayo Akintoye of a Lagos High Court in Igbosere.

“Angered by the action of Mr Aiyenogun for not being in court on February 15, 2016, the judge had no option than to renew the bench warrant as canvassed by the State counsel, Mr Tunde Sunmonu,” Ihekaire said.

The group explained that as human rights organization, it became expedient on its part to expose the suspect, Aiyenogun to the world at large for possible arrest to face his charge and prove himself innocent or otherwise.

The group however counseled that Judges should prevail on lawyers,who flagrantly aid and abet law breakers for pecuniary gain to stop the illicit act as it is dragging the justice to the muds.

They also appealed to the public, security agencies including embassies to assist in providing useful information that would lead to the arrest of the suspect.