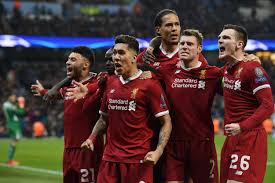 If you want an explanation for why Liverpool fans are feeling optimistic going into this final. It’s simple really:

Less so in 2007, but definitely in 2005, Liverpool were vastly outclassed by the best side in world football. I mean, the gap in quality between 2005 AC Milan and 2005 Liverpool is laughable. We had closed over two years (more due to Milan fading than anything else), yet that final was still incredibly close, with us frankly unlucky to lose. With Pennant in our lineup.

This Real Madrid team is one of the all-time greats. It’s filled with awesome players and Keylor Navas. Youth and experience wedded with nearly unprecedented experience of winning this competition. All led by a great coach. It is as good now as Milan was back then. Possibly better, but that’s a subjective argument.

The difference? The Liverpool team of today is way, way, way better. There is no Traore or Baros in this lineup. Heck, love him to death, but there isn’t even a player on the level of Luis Garcia (again, subjective arguments).

Lovern is sometimes crazy, but between those moments he’s an elite centre back. Djimi was crazier, and the rest of the time was indifferent centre back playing left back. Milan Baros was a 1 in 4 striker. I think us reds sneer too much at Kewell’s impact, but there’s a reason that he continually thrust back into the first team, even when he was a barely fit paper-mache man. We just had no quality up front.

On the weekend, Liverpool will go into the final as underdogs, but not completely outclassed. And considering how we like to play that’s perfect for us.

It will be an Istanbul reverse

My prediction for Saturday is an Istanbul reverse. Liverpool do seem to blitz teams in a frantic 15 minute spell of hyper gegenpressing. Liverpool will enter half time 3-0 up, and then in typical Liverpool fashion will proceed to collapse after releasing the Klavan after 70 minutes.

Full time will end at 3-3 with Liverpool just holding on for extra time. The next 30mins will be pretty unspectacular minus a double save from point blank range to Karius’s face from Ronaldo to give me kittens. He will then stand there with his hands on his hips and that pained expression on his face as if he’s about to cry.

Penalties I’m not quite sure? I just cannot see Liverpool winning this with Karius in goal against the firepower of Madrid. You can count on Milner & Salah, but if we need Lovren to step up.. god help us!

If you an emotional Reds fan, there might be content that you don’t like, so retreat now. If you are up for a healthy dicussion and an analysis based on facts, read through.

From a neutral’s perspective this is sure going to be a one to watch. It has all the ingredients to be a “goals galore”, given the exceptional attacking force and the floundering defense on both ends.

WHO ARE THE FAVOURITES?

Being realistic (not emotional), I believe Real Madrid has a slightly better chance of winning the final. One cannot simply deny the fact they have been doing amazingly well for the past 6-7 years and have won it three times in the past four years.

They have way more experience, tendency to absorb pressure and the ability to perform at this stage. Whereas Liverpool has made it to the UCL final after 11 years and the only players that come to my mind who have won a cup final are James Milner, Jordan Henderson and Sadio Mane. And mind you, these FA Cup and League Cups are no way near the calibre of a Champions League Final.

On the contrary, Klopp although being a mastermind has a very bad cup final record (i-e 1/6 cup finals won). Would he able to cope up with the big stage pressure to get his boys through? Because pressure does get to him, anyone else noticed that he does not look at penalties?

WHAT IS IN LIVERPOOL’S FAVOUR?

In my opinion, against all odds, there are two major factors that might win Liverpool the Champions League title this year.

First of all, Jurgen Klopp’s Liverpool benefits against naturally attacking sides. We have seen time and time again that Klopp’s sides have thrashed big guns who have an aggressive and attacking portfolio. Unlike Real’s style of play, Liverpool have often struggled against deep lying teams as geggenpressing does not work well with bus-parked defenses. Hopefully, we will not see such an approach by Zinedine Zidane. But be wary that Zidane is a very shrewd manager and he might a have a trick or two in the hat to pull. The most recent example is against Bayern (while playing away in the semis), he cut his team’s natural attacking style of play and was patient to score those two crucial away goals. Having said that, as a LFC fan I am more at ease to see Real Madrid as the final opponent than a team like Allegri’s Juventus or Conte’s Chelsea or Jose “whine-all-the-time” Mourinho’s United.

Secondly, Real’s overconfidence and their recent attitude definitely plays in LFC’s favour. Having a star-studded team and being so overly successful in this Championship might just serve them right. It is natural for them to consider Liverpool as the under dogs, but wait till FSM tears through their defence to score a couple.

WHAT LIVERPOOL NEED TO STRATEGICALLY?

Believe it or not, my biggest concern for this tie is TAA. Before you jump the gun and start summoning me on how good he is and is a ‘potential to become a world class player’, don’t forget that he is still a ‘potential’ and not a seasoned campaigner yet. I personally am a big fan of his but still feel that he may not be ready for such a big game yet. If Nathaniel Clyne was fit and in form, I would choose him over TAA in the blink of an eye, based on experience. Against Roma, TAA was brilliant for 60 mins and then he showed how vulnerable he can be. If there is a spell where he switches off like he did against Roma, Christiano Ronaldo and Marcelo will absolutely nail it! In my opinion TAA will need a constant cover by either Wijnaldum or Milner or maybe even Salah. It is less likely that Milner would be able to do it, as he would be playing as a LM, otherwise would have been perfect for such a role.

Dejan Lovren has been doing well (not exceptional) for the past few months but God save us from his incredible ability to self destruct! VVD and Robbo on the other hand are very sound and would most likely take care of themselves.

I really hope Lovren and TAA prove me absolutely wrong, but these two are the weakest link in the chain which Ronaldo would be sure to exploit!

If there is one department where Real dominates by a mile is the midfield and this is where the battle would have to be won. Casemiro, Modric and Kroos are maestros of the midfield! And in contrast, Liverpool is struggling with injuries and would be missing their two regular starters, Emre Can and OX. Having said that there is going to be a huge burden on Jordan Henderson’s shoulders to replicate the performance against Roma where he pocketed Radja Naingollan. The captain along with Milner must neutralize Tony Kroos and Luka Modric to dominate the midfield.

Wijnaldum has by far been the dissapointment of the season for me. It almost seems like I don’t understand his role in the team, probably just filling a position of an injured player or a rested player. He has to fill the shoes of OX who has really raised the bar in his position. Wijnaldum MUST raise his game and have a great game as he did against Roma (2nd leg).

Well what can I say, we have the best attack in world club football right now and I am not going to say much here.

But for the sake of being critical, I guess the only thing would be that Mane is more decisive on a counter whether to pass or to shoot.

Apart from that, in the last two league games (i-e Chelsea and Stoke) I noticed that Salah moved central, which made Firmino go wide. This really killed the sting in Liverpool’s attack. Salah must play in the position where he scored 43 goals and Firmino must stay central to be the engine he is to the Reds’ attack.

Given Real’s abundance of UCL experience versus Liverpool’s lack of experience, Liverpool must kill the game in regular time. By killing the game I mean that if they manage to get a lead, they MUST manage the game to see it safely through. Liverpool’s lack of squad depth suplemented by injuries also begs the fact they should not go into overtime or penalties.

All in all, hoping that Liverpool will take their sixth European Title and replicate the result from 1981. Somehow this final feels even bigger than the 2007 final against AC Milan. It’s growing on most of us!

This summer should see moves for pretty much all of Lukasz Fabianski, Jack Butland, Pepe Reina (already gone to AC Milan) and Tom Heaton. Liverpool have also been linked with Becker, Oblak and even Buffon. If Liverpool don’t sign a very, very good goalkeeper then any progress will be pretty much for nothing.

A back four of Moore, Beckenbauer, Maldini and Rob Jones couldn’t protect Mignolet or Karius.