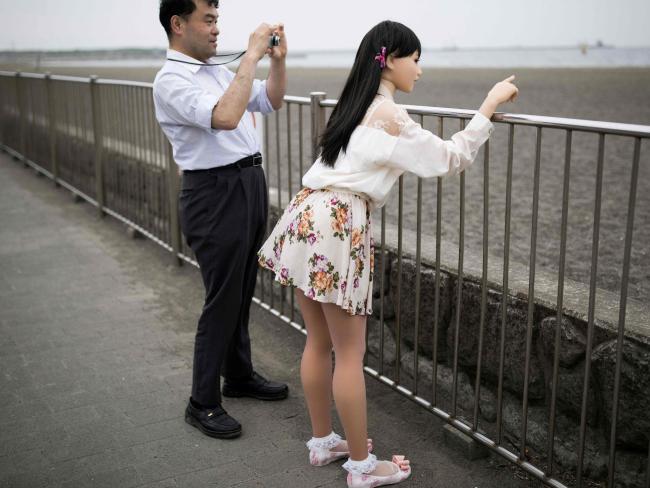 When the spark went out of Masayuki Ozaki’s marriage, he found an unusual outlet to plug the romantic void — a silicone sex doll he swears is the love of his life.
The life-size dummy, called Mayu, shares his bed under the same roof as Ozaki’s wife and teenage daughter in Tokyo, an arrangement that triggered angry rows before a delicate truce was finally declared.
“After my wife gave birth we stopped having sex and I felt a deep sense of loneliness,” the 45-year-old physiotherapist told AFP in an interview.
“But the moment I saw Mayu in the showroom, it was love at first sight,” blushed Ozaki, who takes his doll on dates in a wheelchair and dresses her in wigs, sexy clothes and jewellery.
“My wife was furious when I first brought Mayu home. These days she puts up with it, reluctantly,” he added.
When my daughter realised it wasn’t a giant Barbie doll, she freaked out and said it was gross — but now she’s old enough to share Mayu’s clothes.” Ozaki is one of an increasing number of Japanese men turning to rubber romance in a country that’s lost its mojo.
He also admits to being turned off by human relationships.
“Japanese women are cold-hearted,” he said while on a seaside stroll with his silicone squeeze.
“They’re very selfish. Men want someone to listen to them without grumbling when they get home from work,” Ozaki added.
“Whatever problems I have, Mayu is always there waiting for me. I love her to bits and want to be with her forever.
“I can’t imagine going back to a human being. I want to be buried with her and take her to heaven.”
Around 2,000 of the life-like dolls — which cost from $6,000 and come with adjustable fingers, removable head and genitals — are sold each year in Japan, according to industry insiders.
“Technology has come a long way since those nasty inflatable dolls in the 1970s,” noted Hideo Tsuchiya, managing director of doll maker Orient Industry.
“They look incredibly real now and it feels like you’re touching human skin. More men are buying them because they feel they can actually communicate with the dolls,” he explained.
ALSO SEE: The world’s shortest celebrity marriage
As Japan struggles with a plummeting birthrate, a growing number of men — known as ‘herbivores’ — are turning their backs on love and traditional masculine values for a quiet, uncompetitive life.
Yoshitaka Hyodo, a military buff who lives alone but has an understanding girlfriend, owns more than 10 life-size dummies — many of which he dresses in combat uniform to play out wartime fantasies.
But he claims to have cut down on doll sex.
“It’s more about connecting on an emotional level for me now,” said the 43-year-old blogger, whose curiosity was piqued at a young age when he found a charred mannequin in the street.
“People might think I’m weird, but it’s no different than collecting sports cars. I don’t know how much I’ve spent but it’s cheaper than a Lamborghini,” he said.
Future doll users can expect more bang for their buck as researchers work to develop next-generation sexbots able to talk, laugh and even simulate an orgasm.
But for now, Ozaki’s long-suffering wife Riho tries hard to ignore the rubber temptress silently taunting her from her husband’s bedroom.
“I just get on with the housework,” she sniffed.
“I make the dinner, I clean, I do the washing. I choose sleep over sex.”