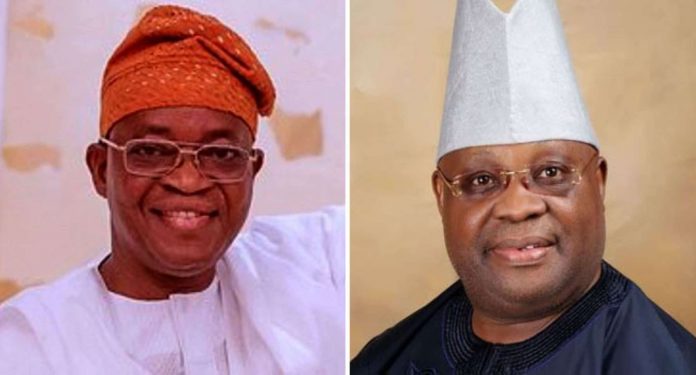 Osun Governor Adegboyega Oyetola has asked the Election Petition Tribunal in Osogbo to nullify the victory of the PDP guber candidate Ademola Adeleke in the just concluded election.

Adeleke was returned elected by the INEC, after defeating his closest challenger, Oyetola, and 13 other candidates, scoring a total of 403, 371

The governor and APC candidate got 375, 027 votes and won in 13 Local Government Areas of the state to come second in the election.

But Oyetola, who submitted his petition on Friday, is now contesting the PDP victory, alleging certificate forgery and over-voting, among other reasons.

The legal team, he said, have established by the petition that the election in those 749 polling units across 10 Local Governments in Osun State was characterized by irregularities pertaining to over voting.

He has sine assembled a 50-man legal team, including 10 SANs to duke it out with Ademola.

The PDP has however responded, saying the arty and is candidate are losing no sleep over the petition.